Froch could take local fight in UK after Ward fight 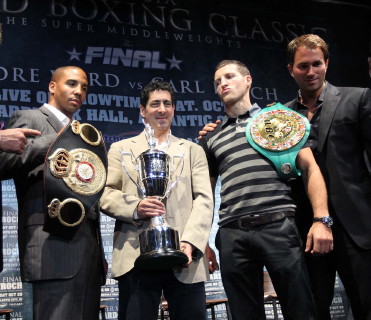 Froch had been talking about wanting to take on IBF super middleweight champion Lucian Bute straightaway in his fight following the end of the Super Six tournament, but it looks as if Froch has had a change of mind. I actually think fighting domestically might not be a bad idea for Froch.

Look at it this way: Froch will likely be coming off of a devastating lopsided 12 round unanimous decision loss to Ward, and he’s not going to be in any position to be trying to fight Bute. Sure, Froch can squawk in the media about wanting to fight Bute but he’ll basically be ignored by the Canadian based fighter once Ward does a number on him.

Honestly, fighting in the UK is pretty much Froch’s best and only option when you think about it. He can’t fight anywhere else, because the UK is where his base is. It makes sense then that Froch would be looking to fight a domestic level chap. I’d suggest he can take on middleweight Darren Barker, Paul Smith, or maybe Tony Bellew. Froch probably won’t be able to get a fight with World Boxing Organization (WBO) light heavyweight champion Nathan Cleverly.

The Cleverly would be there if Froch would win, but he’s probably not going to get a fight with Cleverly off of a loss. Cleverly will better things to do. Bellew would be perfect because he’ll be coming off of a loss to Cleverly, and it would be perfect – two recently beaten guys going at it. The same goes for Barker. He’s about to loss badly to former WBC middleweight champion Sergio Martinez. Barker would be perfect for Froch if he can get him. Like Froch, Barker is slow, very stiff and utterly hittable. It would make for a good fight.