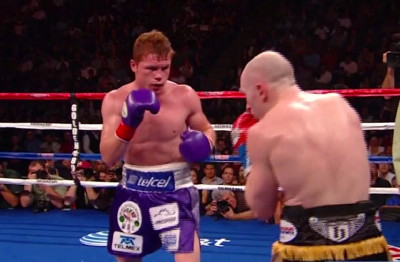 By Dan Ambrose: WBC junior middleweight champion Saul Alvarez (37-0-1, 27 KO’s) has the world at his feet once he gets through his September 17th title defense against #7 ranked World Boxing Council contender Alfonso Gomez (23-4-2, 12 KO’s) at the Staples Center in Los Angeles, California. Alvarez could be facing WBC middleweight champion Julio Cesar Chavez Jr. in the near future.

Alvarez is also someone that could get big money fights against Floyd Mayweather Jr and Manny Pacquiao if his promoter Golden Boy agrees to these fights. These are bouts that would Alvarez would likely be in a bit over his head in, but the experience that he would gain from those fights would be valuable for him as long as he’s not out there too long to absorb punishment.

Alvarez, 21, will have his fight against Gomez shown on the same card as the Floyd Mayweather Jr vs. Victor Ortiz on HBO PPV. This is a huge plus for Alvarez, because he’s quickly building up a huge following in the U.S to go along with his monstrous fan base in his home in Mexico. The plan is to slowly build Alvarez into a big pay per view star along the same lines as Mayweather and Manny Pacquiao. But first, Alvarez has to get by the 30-year-old Gomez. There’s no question that Alvarez will win this fight. The only question is how badly will Alvarez beat him.

« Helenius vs. Liakhovich will be a war while it lasts