Kessler’s eye injury has healed, may face Stieglitz for WBO title in June 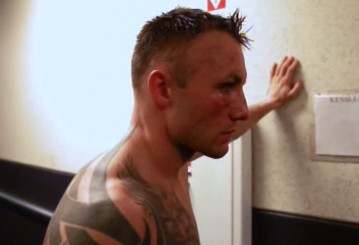 By Sean McDaniel: Former WBA/WBO super middleweight champion Mikkel Kessler (43-2, 32 KO’s) has passed a medical exam for his injured left eye, and it now is considered healed. Kessler, 31, hasn’t fought since defeating WBC super middleweight champion Carl Froch in April of last year in the Super Six tournament. Kessler then pulled out of the tournament due to vision problems with his left eye. The reported reason was a weakness of the superior oblique muscle of his left eye.

At the time that Kessler pulled out of the tourney, he had been scheduled to fight American Allan Green on September 25th. The time that Kessler has taken off has given his eye enough time to fully recover. However, instead of taking a tune-up, which would be advisable given time that he’s been off, Kessler is rumored to be stepping up and challenging World Boxing Organization (WBO) super middleweight champion Robert Stieglitz (39-2, 23 KO’s) in June.

Stieglitz is considered to be the weakest link in the super middleweight champions, and would clearly be someone that Kessler should be able to get by without too many problems if he’s able to regain the same form he had when he defeated Froch in April of last year. Stieglitz was previously beaten by Librado Andrade in an 8th round TKO loss in 2008. Kessler, in turn, easily defeated Andrade by a one-sided 12 round decision in 2007. Some say Kessler isn’t the same fighter he once was back in 2007, but it may be more of a case of Kessler facing much better opposition when he fought in the Super Six tournament.

Kessler has been given Emeritus title by the World Boxing Council, which will allow him to face the eventual winner of the Super Six tournament if he chooses. Froch currently is the WBC title holder, but it may be in the hands of Andre Ward by the time the tourney is over with.

« McCloskey rejects offer, Khan will now be searching for another opponent