Donaire beats Sidorenko, but he won’t be able to take Montiel’s power 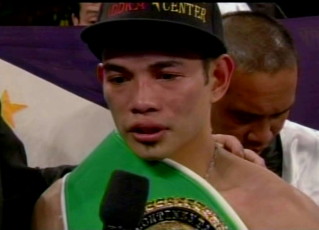 By Dave Lahr: I hope Nonito Donaire (25-1, 17 KO’s) savors his little victory over Wladimir Sidorenko (22-3-2, 7 KO’s) for as long as he can because on February 19th 2011, it’s going to end badly for Donaire when he takes on the hardest puncher in the bantamweight division in WBC/WBO bantamweight champion Fernando Montiel (43-2-2, 33 KO’s). Donaire didn’t have to worry about the kind of power that Montiel has last Saturday when he took on Sidorenko at the Honda Center, in Anaheim, California. Donaire’s fans are crowing about this victory as if Donaire has just fought a great fighter instead of realizing who Donaire had been matched against. This was the perfect opponent for Donaire to beat and look good against, and nothing more than that.

Sidorenko has no power to speak of and was a sitting duck for Donaire’s shots, but when Sidorenko did land some of his weak shots, Donaire sure felt it because he quickly backed up each time as if he had been burned with hot fire. It reminded me a lot of how Donaire reacted when he fought the hard hitting Panamanian Rafael Concepcion last year. Donaire wasn’t even trying to throw power shots after he tasted some of Concepcions’ power, and he went on the defensive for the better part of the fight and earned an unimpressive 12 round decision.

Without having to worry about anything coming back last Saturday night, Donaire knocked Sidorenko down four times and stopped him in the 4th round. Sidorenko, who was little more than a punching bag, sustained a broken nose in the fight. He had already lost two out of his last three fights going into Saturday’s bout, and it makes you wonder if it was that point that made him get the fight with Donaire. You’d like to think that a fighter as highly hyped as Donaire is would at least be taking on someone that has a winning streak going for him instead of having lost two out of his last three fights. That doesn’t seem like a sporting fight when you take on someone that’s not winning the way that Sidorenko was going into the fight.

As for as Donaire’s chances against the big punching Montiel goes, I’d say there not good. Montiel hits too hard, and Donaire didn’t look at all good when he fought Concepcion. Montiel totally destroyed Concepcion recently in a third round TKO in July, and this was the fighter that Donaire ran from for 12 rounds. I can’t see Donaire beating a guy like Montiel.

Klitschko VS Chisora – Time for a reality check »