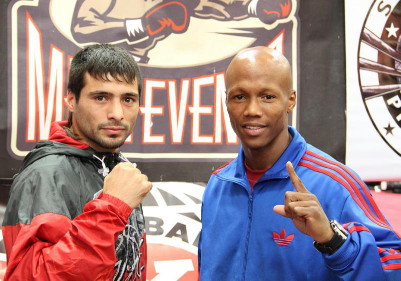 Photo Carlos Suarez, Jr. By Jim Dower: If former two division world champion Zab Judah (39-6, 27 KO’s) is able to get by Argentinian knockout artist Lucas Martin Matthysse (27-0, 25 KO’s) in their fight at the Prudential Center, in Newark, New Jersey, Judah would then have to face and beat #1 ranked IBF light welterweight contender Kaizer Mabuza (23-6-3, 14 KO’s) next for the recently stripped IBF light welterweight title. Beating both Matthysse and Mabuza are going to be formidable tasks for the 33-year-old Judah because it’s been five years since Judah beat a top fighter.

Judah has been losing to top guys since his win over Cory Spinks in 2005, and the only victories that Judah has been getting during that time has come against 2nd tier fighters. On Saturday night, Judah faces a big test in the hard hitting punching machine Matthysse. While I think Judah could have handled Matthysse without too many problems in his prime, he’s not the same fighter he once was years ago, and unless Judah can get the Argentinian out early in this fight, we could see Judah wear down and get stopped again.

This is a fight that Judah has to win within eight rounds, because once it goes past that point, all bets are off. Judah has had stamina problems in his fights that have gone past eight, losing to Miguel Cotto by 11th round TKO in 2007 and Joshua Clottey by a 9th round stoppage in 2008. Matthysse hits plenty hard and throws nonstop punches.

Judah can punch about as hard as him, but he’s not as active and his chin is shaky. Getting through this fight in one piece is going to be a major task for Judah. But he will still have to beat the 30-year-old South African Mabuza if Judah wants the IBF title. Mabuza is a punching machine just like Matthysse, but even better. Recently, Mabuza took apart Kendall Holt, beating him down and stopping him in the 6th round in February of this year. I can see Judah having a lot of problems with Mabuza, if he’s able to get past Matthysse.

« Roach says Manny is back, promises a knockout over Margarito