Fury: “Haye is a blown up cruiserweight that shot his mouth off and just wants easy fights” 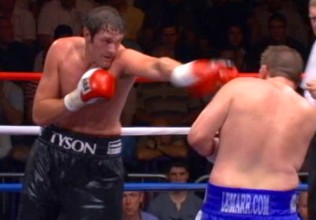 By Scott Gilfoid: Undefeated British heavyweight Tyson Fury (12-0, 9 KO’s) came out with both barrels blazing in his opinion of World Boxing Association (WBA) heavyweight champion David Haye (24-1, 22 KO’s), who the 22-year-old Fury doesn’t think too highly of. In an article at Eastsideboxing.com on their On the Ropes Boxing Radio, Fury had this to say about Haye: “I think David Haye is a blown up cruiserweight who shot his mouth off and got himself a world title shot and beat a very poor champion in [Nikolay] Valuev. If I got to fight Valuev in Quebec, Canada on the 18th, I’d take the fight no problem…He’s [Haye] been avoiding the Klitschkos and he won’t fight them. So David Haye is not a man of honor to me, and he just wants to fight easy fights.”

I totally agree with Fury. I think Haye talked his way into a title shot against the weakest of the heavyweight champions last year in 36-year-old Valuev, and then barely beat him by a 12 round majority decision in one of the most dull fights I’ve ever seen before. And Haye doesn’t look good at 217, looking like he’s carrying around extra blubber.

Fury is right about Haye avoiding the Klitschkos for easy fights like John Ruiz and Audley Harrison. Haye is milking his WBA title for all it’s worth, but he’s so small, and his chin is so fragile, Harrison might just win this fight if he has the sense to reach back and let loose his left hand for all he’s worth early in the fight against Haye.

Fury says “Audley Harrison, he’s got about as much heart as this phone I’m on, so I don’t know where a guy’s going to go like that against someone as ferocious as David Haye. I do think that if Harrison connects on him with any sort of shot, he’s gone. David Haye will be knocked out. It doesn’t make any difference to me who wins, because Haye and Harrison are both on my radar and I’m hunting them down. But it’s going to be a good fight. It’s one of those fights you can’t call because it depends on which Harrison turns up, for one. Haye’s a small heavyweight. He can punch, he’s fast, but then again he’s never been hit by a proper heavyweight before and Harrison is a big man. He’s 6’5″ 250 pounds, and if he hits him, it’s going to be game over. I just hope Harrison comes out fighting and not being negative and doesn’t want to fight. It could be very interesting because I know if Harrison attacks him at all, he’s got Haye, because he’s a smaller man and his chin is a bit suspect as well. Can I call it? No, because it’s very, very close on my card.”

Haye would probably be furious to know that Fury isn’t picking him by an easy win, because Haye doesn’t even see this as a fight. Haye wants to be seen in the same class as the Klitschko brothers, but no one, aside from Haye’s loving British fans, see him anywhere close to being in the same as the klitschkos. I can see Harrison winning this fight. All he needs to do is tap Haye’s glass jaw once and we’ll have shards of glass all over the ring and Haye laid out flat on his back wondering what happened.

I Love You, Boxing »