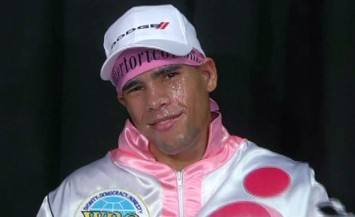 Lopez’s promoter Bob Arum is even looking at setting up Lopez’s next fight after that against unbeaten WBA featherweight champion Chris John in a bout that Arum will be looking to put at the Cowboy Stadium on the same card as Julio Cesar Chavez Jr. vs. Kelly Pavlik in Arlington, Texas. Talk about counting your chickens before they’ve hatched. We don’t even know if Lopez, a great fighter as he is, can get by Marquez. Granted, Lopez has a number of things going for him in this fight, such as being the younger fighter than the 35-year-old Marquez.

Lopez has been in less wars in his five year pro career compared to the many wars that Marquez has been in with his 15-year pro career. Marquez really didn’t start taking punishment of any kind until he met up with knockout artist Israel Vazquez back in 2007. However, in their first three fights together, Marquez took an awful lot of punishment from the hard-hitting Vazquez and ended up losing two out of the three fights.

Marquez came out of their wars in better shape, however, and was able to easily stop a badly deteriorated Vazquez in the 3rd round last May. But you can’t deny that Marquez took a lot of heavy shots in his first three fights with Vazquez and that has to be a factor, besides age, in a fight against Lopez. Marquez is also smaller than Lopez at 5’5″ compared to Lopez’s 5’7″, and has fought much of his career at bantamweight. Lopez has fought a lot at super bantamweight before moving up to the featherweight division earlier this year with a win over WBO featherweight champion Steven Luevano in January.

Lopez is naturally the bigger fighter compared to Marquez, and that could be a problem. Lopez may or may not much as hard as Vazquez, but his bigger size might spell problems for Marquez. Additionally, Marquez hasn’t been very active in the ring in the past couple of years, fighting only three times. That’s not a lot of activity and it could be a plus or a minus for him in a fight with Lopez. On the one hand, it’s good that Marquez hasn’t been fighting a whole lot in the last couple of years because it’s kept him from taking a lot of punishment.

But on the other hand, Marquez hasn’t been in the ring and may not be as sharp as a fighter like Lopez, who has been staying active and fighting a lot against the best fighters in the sport. In the end, the age, the size, the wear and tear on Marquez might be too much for him to beat a talented fighter like Lopez at this point in his career.

« Marquez vs. Diaz II: Juan Manuel has big fights ahead of him if he wins this

His name is Pretty Boy Floyd »