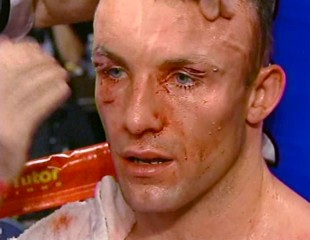 By Sean McDaniel: Former World Boxing Association super middleweight champion Mikkel Kessler (42-2, 32 KO’s) has reportedly canned his longtime trainer Richard Olden. This is unexpected news, however, with Kessler getting badly beaten by American Andre Ward in a 11th round technical loss on November 21st. With a loss as bad as the one that Kessler experienced against Ward, it’s no great shock that Kessler’s trainer was replaced. However, it seems like a bit of a waste, because it’s unlikely that any trainer on earth could have helped Kessler beat Ward on that night.

Kessler just looked fundamentally outclassed by Ward, and it goes beyond mere training in my estimation. Ward just looked like the better athlete compared to Kessler. It seems like a mistake to get rid of Olsen, since he’s the one that’s brought Kessler this far. Instead of getting rid of his trainer, Kessler should have focused more on what he did wrong in that fight. Like I said, I just don’t know what Kessler could have done to beat a fighter like Ward on that night.

Ward was just too fast, and too powerful with his quick combinations. He made Kessler pay each time he would land anything. However, if getting a new trainer helps Kessler prepare mentally for his April fight with World Boxing Council super middleweight champion Carl Froch, then I can understand why it would be a good thing to get a new trainer. Kessler will need to be at the top of his game to beat Froch.

But Kessler was having problems before he ever stepped in the ring against Ward. Kessler looked poor in his fight prior to the Ward bout against Gusmyr Perdomo in September 2009. Kessler won that fight by a 4th round knockout, but he was hit often by Perdomo and looked slower than he had been a year earlier.

Even in 2008, Kessler didn’t look all that impressive in stopping Russian Dimitri Sartison in a 12th round technical knockout. Sartison had good success in catching Kessler with right hands throughout the fight. And while Kessler eventually wore Sartison down, it was troubling to see how many right hands Kessler was forced to eat in that fight. In 2007, Kessler lost a 12 round decision to Joe Calzaghe, and took a lot of head shots in that fight.

Calzaghe may not have been landing really hard punches, but he hit Kessler numerous times to the head, and that may have had an effect on him that we’re only starting to see now. The bad news for Kessler is that it doesn’t get any easier for him in his next fight. Froch is going to be coming out full bore in that fight trying to take Kessler’s head off with every punch. Even if Kessler wins the fight, Froch is going to land a ton of heavy shots and it’s not going to be easy for Mikkel.

The only way that Kessler will be able to escape with a win in that fight is if he is able to stay on the move for 12 rounds. He can’t afford to stop and trade shots with Froch, because he’ll absorb too much punishment. Kessler was cut badly over both eyes in his fight with Ward, and the scar tissue around his eyes will likely tear easily if Froch can land enough shots. Kessler fought poorly after he was cut against Ward, and complained continuously that he couldn’t see. That may be all that Froch needs to beat Kessler, a cut or two.

« McGuigan: “He [Pacquiao] is a victim of his own success” – News