Vitali Klitschko: “I would Knock Haye out” – Boxing News 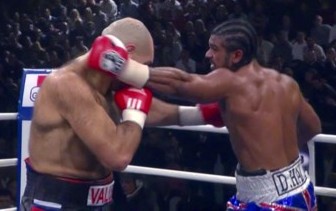 By Scott Gilfoid: In an article in The Sun, World Boxing Council heavyweight champion Vitali Klitschko had some sobering news for newly crowned WBA heavyweight champion David Haye, saying “I’ll fight him at any time and knock him out”. Full congratulations to Haye. It was a good performance, a good points win. It was very close. It is a good fight for the future, maybe. I am ready to fight anyone in the world. I am ready to show to everyone I am the strongest in the world.”

That doesn’t sound good for Haye with Vitali making dire predictions about a fight with the British champion. Haye said he’d like to fight the Klitschko brothers after his close 12 round majority decision win over Valuev last Saturday night. Was Haye merely just saying those things for lip service to make himself look heroic by saying he wanted to fight the Klitschko brothers?

Gosh, I really hope Haye was serious about fighting them, because it looks like Vitali wants to tear Haye’s head off at this point. The reason I wonder about whether Haye is serious about fighting the Klitschko brothers is because he’s backed out of two fights with them, backing out once for each brother. Will having a title change all this? I hope so, because then Haye won’t have an excuse this time.

I find it hard seeing Haye beating either brother with his anemic punch output that he had against Valuev. Haye claimed after the bout that he had hurt his right hand early in the fight, possibly hurting it as early as the 2nd round. Funny that Haye continued to use his right hand for the entire bout. I always thought that when a fighter breaks their hand, they stop using that hand completely but Haye was using it for the entire bout.

If it was injured, that still doesn’t say much for his other bouts where Haye has showed a problem with a low punch output. Haye doesn’t throw enough punches to beat either Klitschko brothers, especially Vitali. Haye isn’t going to pot shot his way to victory over the big 6’7″ Vitali. Haye can try that garbage, but Vitali will block the pot shots or walk through them and destroy Haye with power shots. No way would Haye make it to the 5th round. He won’t have the chin.

Unless Haye runs continuously, even worse than he did against Valuev last Saturday night, Haye won’t make it to the 5th. I know that Haye won’t stand and trade with Vitali, so you can be assured that Haye will have his track shoes on for that fight. However, throwing 10 shots per round won’t beat a quality fighter. I’m not just limiting that observation about Vitali.

Haye has to man up and throw more punches if he wants to beat better heavyweights than Valuev. Haye can’t run like a gazelle and expect to beat those guys and especially not the Klitschko brothers. It won’t work. And what’s more tragic is that Haye is supposed to be the new exciting fighter, the one that is supposed to breathe new life in the heavyweight division.

I’m sorry, but Haye isn’t going to be that kind of heavyweight. Haye will be someone who is less interested in mixing it up than former IBF heavyweight champion Chris Byrd was. Byrd would actually try to fight you at close range, but Haye is the opposite of that. I honestly can’t think of one heavyweight that fights like Haye, because most of them are willing to mix it up and not pot shot and run like Haye.

The good thing is that Haye will be destroyed soon by one of the Klitschko brothers and we’ll be rid of him. I’d like for Haye to stick around for awhile and liven up the heavyweight division, but he just doesn’t seem to have the size or the temperament for the division.

« Does anyone think Haye looked good against Valuev?