Does anyone think Haye looked good against Valuev? 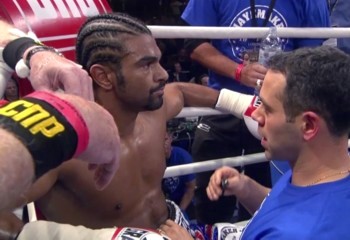 By Scott Gilfoid: I hate to rain on the parade of fans of WBA heavyweight champion David Haye, but your man looked like utter crap last Saturday night against Nikolay Valuev. Haye put together one of the worst performances in taking away a heavyweight champion’s title that I think I’ve ever seen in my lifetime.

By running around the ring, throwing useless arm punches and fleeing any kind of contact with the big seven foot Valuev, Haye hardly put together the kind of performance needed to take away Valuev’s heavyweight title. Like I said previously in one of my articles, I saw the fight as a 12 round draw between Haye and Valuev. However, upon seeing the fight for a second time, I now firmly believe that Valuev should have won the fight by a round.

I suggest boxing fans watch the bout themselves, but with the sound turned down to filter out the screaming that the fans were making each time Haye would attempt one of his pot shots. I think once you see the fight for a second time with the sound off, you’ll agree with me that Valuev should have won the fight or at least should have been given a draw in this fight.

Valuev fought the fight as if he was the challenger instead of the champion. Instead of Haye coming at Valuev, it was Valuev who had to chase Haye around the ring while the British fighter did big laps around the ring, changing direction constantly. To think that this is supposed to be the new exciting fighter in the heavyweight division is frankly nauseating to me. Haye might have been exciting as a cruiserweight, but he looks mediocre as a heavyweight, and I’m not just talking about this fight. Haye looked average against Monte Barrett.

I want to see Haye in with a good fighter instead of the big show Russian. However, I do think there should be a rematch between Valuev and Haye, because I think the wrong decision was handed down. Challengers don’t usually win titles by running from the champion, now do they? Where I come from, they don’t hand over titles to fighters that wrong the entire time and average 10 punches thrown per round like Haye.

I’d be curious to see what Haye’s final punch output was for this fight. I bet it wasn’t more than 120 punches for the entire fight, if that. Anyway, I’d like to see how Haye does against the likes of Samuel Peter, Chris Arreola or the Klitschko brothers. I know that Haye mentioned wanting to fight the Klitschko brothers after the fight on Saturday night, but I doubt that it’s possible.

Now that Haye has the WBA title, he’ll probably make negotiating a fight with the Klitschko brothers an extremely tough proposition. As such, I doubt Haye will get a fight against either Klitschko. Haye will have to settle for fighting someone else if he can get by John Ruiz next, and that’s a big maybe.

But if Haye is the new breed of heavyweight champions, I hope he doesn’t last because I think he’s bad for the division. We don’t need another runner. We had Sultan Ibragimov who fights a lot like Haye minus the pot shot power, and he was horribly boring. Haye is actually worse than Ibragimov in my view because at least Ibragimov was looking to mix it up with his opponents instead of pot shot and run like Haye.

In a perfect world, Haye will beat Ruiz somehow and then take on Vitali or Wladimir Klitschko. Of course, they’ll both destroy Haye and put him back to where he belongs in line as a contender where he’ll be forced to fight it out with the other top contenders in the division like he should have to begin with.

I suspect that Haye will be beaten again and again as a contender and will turn into a journeyman before long. With his 15 minutes of fame expired, Haye will then get out of boxing by the age of 31, which is his goal.

Vitali Klitschko: “I would Knock Haye out” – Boxing News »