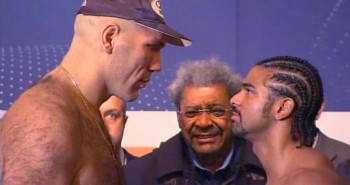 By Scott Gilfoid: On Saturday night, I’m afraid that David Haye and his inflated ego are going to be grounded by the big seven foot Russian WBA heavyweight champion Nikolay Valuev when they get it on in Nuremburg, Germany. Haye may have the speed and power advantage in this fight, but he’s two very important ingredients that will prevent him from winning the fight – a good chin and size.

Haye has been hurt in fights in the past against cruiserweights, and has been very careful in his two fights at the heavyweight level. You can discount anything that Haye accomplished at the cruiserweight division, because that’s one of the weakest divisions in boxing and the fighters are much smaller than heavyweights.

Haye bragging about being the best fighter at one time in the cruiserweight division is like saying he’s the ruler of a junkyard. Valuev is the natural heavyweight, has the better stamina, size and chin. And on top of that, Valuev will be fighting in Germany, where he fights most of his home bouts. This won’t be a fight held in England with loud crowds that would influence a judge.

Actually, the judges will likely have no bearing in this fight, because I can’t see it going the full distance. Haye’s chin is too brittle, and his stamina is far too poor for him to make it the full 12 without him getting hit hard and stopped. I expect Haye too look good for maybe three rounds.

By the 4th round, Haye will start showing signs of running out of gas. Haye was able to fight long enough to get a 7th round stoppage over Jean Marc Mormeck in 2007, but that was against a fighter that was four inches shorter than him at 5’11” and who also had four inches lesser reach than Haye.

It was a fight where Haye wasn’t pressured hard and didn’t have to worry about getting hit while on the outside. The seven foot Valuev is going to be able to hit Haye when he wants and where he wants, because he’s got a seven inch reach and a nine inch height advantage over Haye in this fight.

A lot of boxing people feel that Haye will win because of his high degree of self confidence. But Haye’s self belief seems a tad overboard. I don’t mind a fighter being confident, but he’s a little too confident for my tastes and its’ downright scary. I’ve met people like that in real life and seen how their confidence has caused them to make huge mistakes.

I think Haye’s confidence will lead him to fight in a reckless manner, the same way he did against Carl Thompson in 2004. Haye went out with guns blazing in that fight and tried to run over a veteran with a great chin and good power. In hindsight, it was foolish for Haye to fight like that against Thompson. It didn’t matter that Thompson was 40-years-old at the time and was near the end of his career.

Haye showed no respect for what Thompson could do in the ring and thus Haye ended up paying the price for his arrogance by being stopped. Haye says that the loss was a good thing for him and that he learned from it. I don’t think so. Haye seems just as arrogant now as he was then, and has fought the exact same way in every one of his fights since that time.

The only difference is that Haye has fought beatable fighters and hasn’t had to pay the price for his out of control style of fighting. Haye has beaten a number of cruiserweights since that time and two heavyweights – Monte Barrett and Tomasz Bonin – but nobody that I would consider on the level of Valuev. I’m not saying that Valuev is a great fighter, but he’s better than the cruiserweights and the two heavyweights that Haye has fought since his loss to Thompson.

I’d really like to pick Haye in this fight, but I just can’t. He’s too small, too out of control with his style of fighting and his chin is too weak. As such, Haye is going to get destroyed by Valuev by the mid point of the fight. Haye doesn’t have the experience needed to win the fight. Maybe he could if he wasn’t in such a hellish rush to get a title shot, which I feel he hasn’t did anything to earn. Haye has taken a short cut to the top, and with anyone who has taken short cuts, usually they pay the price for there lack of preparation.

Prediction: Valuev by 7th round TKO.