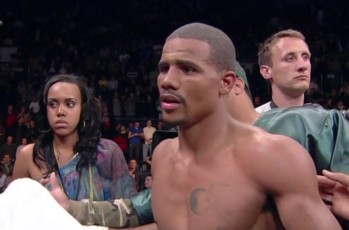 By Scott Gilfoid: This maybe somewhat disappointing to many boxing fans of WBC super middleweight champion Carl Froch but the talented boxing great Barry Mcguigan believes that Andre Dirrell (18-1, 13 KO’s) should have won the fight between him and Froch last weekend, according to an article from Mcguigan in The Mirror. Mcguigan, a former WBA featherweight champion and now an expert boxing analyst, says “Froch got the decision but in my view he didn’t deserve it.”

Mcguigan: “Froch (right) moaned about Dirrell’s negativity. It is for him to find a way around that. He didn’t do that on my card.” If Froch was unhappy with Dirrell’s boxing style, he should have found a way to defeat rather than resorting to fouling. I didn’t see any plan B from Froch, aside from the fouling that he started in the 5th round. Normally, that kind of thing would have been nipped in the bud right there by an assertive referee.

“I believe Dirrell will box the ears off Abraham and storm back into contention,” Mcguigan says. I completely agree with you. I’ve been saying the same thing recently. Abraham is going to get a major boxing lesson against Dirrell. Abraham will probably foul as well, unfortunately. He likes to throw elbows when he punches and he tends to land a rabbit shot every now and then, although not on the level of what Froch was doing against Dirrell. Abraham is too slow and limited and doesn’t throw enough punches to beat a world class fighter like Dirrell.