Abraham and Froch: The King and The Cobra come up trumps 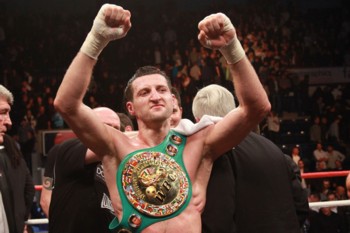 By Craig Martin: So the first two fights of the Super Six have come and gone. What have we learned? ‘King’ Arthur Abraham has really and truly laid the marker as a genuine winner, even at this early stage. Jermain Taylor, well, the question will no doubt be asked; what has he got left? Carl Froch continues to show massive heart and grit but one wonders just how far that will get him. And Andre Dirrell has proved that he does indeed belong with the world’s elite in this weight division.

First up, the Abraham/Taylor fight. Before this match I had seen little of the Armenian based German. I had heard of his odd style of extreme offense/defence. I knew of the talent that Taylor had. I also knew of his seemingly evident flaws. Many wondered just how he would rebound after the Froch loss.

The fight unfolded how many had predicted. Abraham just didn’t look like he could be stopped. I was bemused slightly as his style. He doesn’t fight three minutes of every round. He doesn’t have lightning reflexes or great lateral movement, things that can separate average fighters from good ones. What he does have though, is almost an iron-clad defence. Taylor’s constant jabs were just hitting gloves. He also proved his immense strength. Some wondered just how he would adapt moving up a weight class. Considering the stories of how he had struggled with the 160 pound limit, this new weight allowed Abraham to show his true power and one wonders just who could halt the Armenian Express? I do believe though that Abraham can be out-boxed and out-worked for 12 rounds. Whether Dirrell can do that next up is a really tough ask on the young American.

Next the Dirrell/Froch contest. It was a very cagey opening. Understandable considering that Dirrell was in his very first title match and the biggest match of his career in a hostile environment. And for Froch too, wary of being behind early on the scorecards again. We learned a couple of things. First, Dirrell showed a lot of fight. He boxed very well from the outside. He has blinding speed and lightning reflexes and showed some power too. Although I may be very generous here, I felt a couple of times that Froch was hurt. Maybe not enough to hit the canvas or hold for dear life but I think he felt that Dirrell isn’t feather fisted. We also saw his inexperience – point deductions (which luckily didn’t affect the outcome) and in the clinches. Froch showed, as was expected, his will and granite chin, determination and power. We also must admit, that we seen Froch’s limitations. He can be out-foxed, frustrated and hit a bit too easy.

The fight was close. I don’t think that there would be major complaints or upheaval if either got the nod. I think Froch did probably deserve the decision. As the champion, the challenger just didn’t do quite enough to take the belt back to America. Dirrell showed a lot of guts though. And I reckon most would agree that if this fight came a little later for Andre, he could be the new WBC Super Middle Weight Champion right now.

The Super Six has started of really well. I think it’s only going to get better.