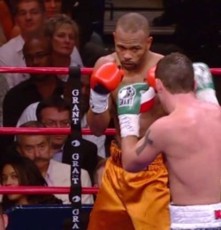 By Sean McDaniel: 40-year-old Roy Jones Jr. could ruin his chance for a big money payday in a rematch with Bernard Hopkins if Roy can’t get by his next opponent Australian Danny Green on December 2nd. In hindsight, it might end up being a costly mistake for Jones because Green, a former light heavyweight champion, is still fighting quite effectively and is a very tough opponent for Jones to be taking at this stage in his career.

The bout will be for Green’s International Boxing Organization cruiserweight title. Jones will be moving up in weight to make the fight, and get a chance to win another belt to add to his growing collection – even it’s a little known one like the IBO strap. Jones has previously won titles in the middleweight, super middleweight, light heavyweight and heavyweight divisions.

Hopkins, 44, hasn’t fought since soundly beating Kelly Pavlik by a one-sided 12 round unanimous decision in October 2008. Hopkins hasn’t been able to acquire a fight to his liking since that fight and is really counting on Jones bout taking place.

Hopkins lost to Jones by a 12 round unanimous decision in 1993, a bout in which Jones won by four rounds on all three judges’ scorecards. Jones complained later that he had beaten Hopkins with one hand saying that he had injured one of his hands during the fight. In watching the fight, Jones gave Hopkins a lot of problems with his lightning fast hand speed and seemed to win the rounds as he pleased.

However, a lot of things have changed since then. Hopkins has gotten a lot better and Jones has aged. Jones still has his quick hands, but he frequently likes to cover up on the ropes nowadays where he seems to take breaks.

That won’t be a good move for Jones to make if he’s in with Hopkins because Bernard will be pressuring him through the entire fight and will make Jones pay if he plays the rope a dope routine with Hopkins. If Jones looks anywhere near as good as he did in his last fight, a 10th round stoppage of Jeff Lacy, then Hopkins could be in for trouble.

Hopkins doesn’t have the power of Antonio Tarver or Glen Johnson, and doesn’t have the quickness and work rate that Joe Calzaghe possessed. Hopkins is more selective and methodical nowadays, and tends to try and beat his opponents by landing a pot shot and grabbing them immediately in a clinch. Hopkins also likes to jump in and out throwing two to three punch combinations. Those tricks won’t work against Jones because he’s a lot faster than Hopkins and will catch him when he comes in.

« What Next for Arreola?

News – Vitali Klitschko to face Johnson or Maskaev in December »