Ricky Hatton Needs to Get off His Duff and Help Boxing 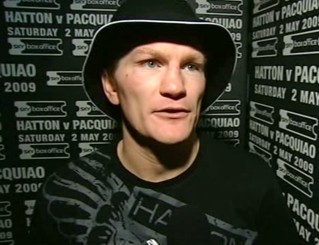 By Scott Gilfoid: Yesterday, Ricky Hatton (45-2, 32 KO’s) said “Boxing is dying” in an interview with The Manchester Evening News complaining about boxers “who talk the talk, but don’t back it up.” The last thing that Hatton needs to be doing is complaining about boxing dying if he’s not going to help the sport by getting back in the ring. Hatton should have been over his defeat to Manny Pacquiao by now.

Hatton is also upset about the roadblock that came up with his Brother Matthew Hatton’s fight with Zab Judah. The fight fell through when Judah decided he wanted to have the fight take place at 140 rather than 147. But if Ricky Hatton really wants to help boxing, he needs to get up off of his backside, stop eating and start training for a fight against Amir Khan. I can understand Hatton wanted to take three or so months off to recover from his humiliating 2nd round knockout against Manny Pacquiao in May, but it’s been three months now.

Hatton should have finished licking his wounds by now and started training for his next fight. He’s not the type of fighter that can afford to take off vast stretches of time because of his tendency to overeat and drink and balloon up in weight.

Unless Hatton gets back in the ring so, I fear he may eat himself to a point where he can’t take off the weight without resorting to something drastic like stomach stapling. I’m sure Hatton was traumatized by his loss to Pacquiao, but he needs to get over it already and get back in the ring.

He only has himself to blame for the loss. If Hatton had listened to his trainer Floyd Mayweather Sr. and boxed Pacquiao instead of trying to slug it out with him, Hatton at least would have had a fighting chance to beat Pacquiao. Hatton didn’t do that. Instead, he tried to slug it out with the faster Pacquiao and got drilled almost immediately. Okay, so the loss hurt.

I can understand that, but Hatton needs to forget about it and go after Khan. I’d prefer Hatton to fight American Timothy Bradley first, but I can see how it would be better for Hatton to ease into that fight rather than going after him immediately due to Hatton’s terrifying knockout loss. Khan is a good choice because he’s like a tune-up fight.

He has no power to speak of and arguably one of the weakest chins in the light welterweight division. By fighting Khan, Hatton would be getting his confidence back because he’ll likely tear Khan apart. And the best part of all, Hatton will be getting another huge payday without the same kind of risks involved with fighting someone like Pacquiao or Bradley. The last thing that Hatton needs is someone to come along and destroy Khan before he gets a chance. Talk about missing your opportunities.

« Haye-Valuev: If David Loses Should He Go Back to Cruiserweight?

What Happens to Pacquiao If He Can’t Stop Cotto? »