What Happens to Pacquiao If He Can’t Stop Cotto? 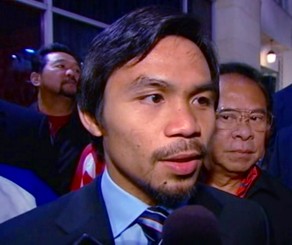 By Manuel Perez: Manny Pacquiao (49-3-2. 37 KO’s) better hope that he can stop Miguel Cotto (34-1, 27 KO’s) as early as possible in this fight, because once Cotto gets his train started, Pacquiao is going to be in for a world of hurt on November 14th at the MGM Grand, in Las Vegas, Nevada. What we’re looking at here is a fighter that has had it easy in his last seven fights (with the exception of Pacquiao’s fight against Juan Manuel Marquez), defeating most of his opponents early on without having to take very much punishment in the process.

If Pacquiao wanted to fight a light welterweight, why didn’t he fight Timothy Bradley, Kendall Holt or Marcos Maidana instead? All of them were in their prime at the time that Pacquiao fought Hatton and I considered all of them as better fighters than Hatton at this point. For some reason, Pacquiao chose not to fight them.

Now, Pacquiao is going to be fighting Cotto instead of Shane Mosley, Paul Williams and Andre Berto. Although Cotto is still in his prime, there are questions about whether he’s the same fighter he once was after losing to Antonio Margarito by an 11th round TKO last year. Why didn’t Pacquiao fight Mosley, Berto or Williams if he wanted to fight a welterweight?

Cotto may or may not be the same fighter he once was, but I think Pacquiao is in for big trouble if he can’t get Cotto out of there as quickly as possible. Cotto hits much harder than any opponent that Pacquiao has fought before and doesn’t have to load up with his shots to hit really hard. Pacquiao is going to be in for a shock if he can’t score a quick knockout because for once, he won’t be the stronger fighter.

I think Hatton was stronger than Pacquiao but he messed up by getting taken out so quickly and didn’t get much of a chance to show his power in that fight. Cotto has a better chin than Hatton, and will be able to take Pacquiao’s shots early in the fight without folding up. I think Cotto is going to rip Pacquiao apart as the rounds go on after he realizes how much bigger and stronger he is compared to Pacquiao.

« Ricky Hatton Needs to Get off His Duff and Help Boxing

Abraham vs. Taylor: Does Jermain Have Enough Left to Win? »