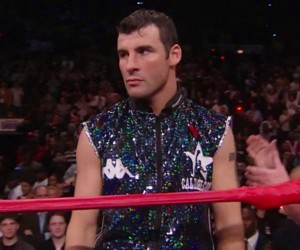 By Liam Santiago: As a Joe Calzaghe fan, and a boxing fan, I was disappointed to see him retire. Of course, the man is a legend. At the age of 35 he outpointed undefeated Mikkel Kessler and he also defeated Bernard Hopkins, who is currently rated no.2 in boxingnews24 p4p rankings. But I want to see him fight one more fight. It would be the difference in him being remembered as an amazing fighter or a great fighter. I honestly believe he could beat any contender out there today, so why not? Give the boxing fans a great fight?

In his last fight Calzaghe defeated veteran Roy Jones Jnr in New York. Although he suffered the knock down, he did what all great boxers do and got up and went on to win the fight. He proved he is still in prime condition. If he had one more fight, with Chad Dawson, his legacy would be so much bigger, whether he wins or loses. Many boxers would rather get seven shades of hit knocked out of them rather than skirt around the edges. I admire Calzaghe, but I wish he’d come out of retirement for a final showdown.

I’m prepared to take abuse for this. The Roy Jones fight should not have happened. Why? Do I need to explain? Jones is a veteran. Calzaghe had big options. He had fighters calling him out left right and centre. Chad Dawson, young and unbeaten. Carl Froch, the young British, unbeaten power-house. He could have fought a rematch with Bernard Hopkins who was defeated by Calzaghe in an ‘unconvincing’ bout. The list goes on, but I’ll say one thing, Roy Jones is at the bottom of it. Please, don’t think for one second that I’m trying to mask Joe’s ability. His hand speed, footwork, heart and chin is absolutely stunning. I’d say he has the ability to be one of the best fighters to ever live. He just needs to prove this.

The big question all fans ask is, Will he return? All we seem to get in reply from Joe is something like, ‘only for 10 million pounds’, or, ‘I don’t think so’. Joe could easily beat Carl Froch on points so why not get yourself back in the gym and fight him. Same with Chad Dawson. Of course, the comments will flow for this article. ‘He deserves his retirement’ and the likes. Well, I’ll answer that now. Yes he does, however, he has what it takes to beat these guys and his legacy is often in question over the quality of his opponents. Like it or not, it’s true. If you look at some his opponents he was fighting, at around his 20th fight, they looked more like Mr.Blobby than professional boxers. What would critics say if Khan fought those guys. Calzaghe has a legacy which many question whether he deserves it. He needs to respond to that by fighting Chad Dawson. Personally, my prediction would be Calzaghe on points.

« Why Pacquiao Will Destroy Cotto: Fire Up The Grill and Simmer Until Ready