Where Does Haye Go Now? 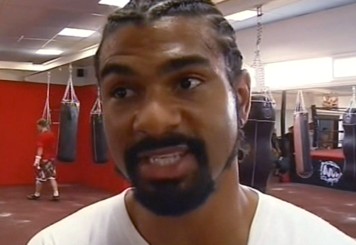 By Chris Williams: With the recent news about International Boxing Federation – IBF/WBO heavyweight champion Wladimir Klitschko and David Haye’s negotiations hitting an impassable wall, it looks as if Haye is going to have to seek out another alternative for his next bout, one that doesn’t involve a Klitschko. Of course, if Haye is truly interested in fighting Wladimir, he should probably give into whatever Wladimir’s asking and start instantly groveling. I doubt Haye will, though. I guess I can’t blame him for not being eager to give into Wladimir’s prerequisites, because if the fight were to take place, Haye would get knocked out and then all this grandstanding and hype would be finished.

However, by not negotiating successfully, Haye can move on to some more journeyman fighters and continue with his hype machine for a little longer.

So who should Haye fight next? Well, if he wants any respect he’ll focus on the upper tier fighters only. I doubt he will, but I strongly advise him to do so. Since Haye has issues with taking hard punches, I could suggest he go after someone like Michael Grant, Ray Austin, Kali Meehan, Matt Skelton, or Brian Minto.

In other words, the bottom dwellers of the top 15. I wouldn’t advise Haye to go above these fighters against more talented heavyweights because I think Haye will have his hands full beating just these guys, let alone the top 5 heavyweights. In facing Austin, Grant, and Meehan, Haye would at least be preparing himself somewhat for a fight against one of the Klitschko brothers in the future.

Each one of these fighters is above 6’5″, punch fairly hard and have decent skills. All have issues with their chins but in most cases they’re able to stay in there for a few rounds before folding. Haye would do well to if he could get a victory over one of them and then in the absence of a Klitschko fight, take on another lower level heavyweight in the division.

Meehan might be too good for Haye, however. Meehan can take a shot and bring it and would likely turn a fight against Haye into a war before it’s over. Haye might be better off steering clear of him and going after Minto or Skelton, both good fighters but not particularly powerful.

These would be good stay busy fights for Haye without the threat of a fight against a better heavyweight could give him while waits for Vitali to get free of his commitments to Juan Carlos Gomez and possibly Oleg Maskaev.

« Wladimir Not To Face Haye or Arreola: Dimitrenko Could Be Replacement