Will Calzaghe Come Out Of Retirement To Fight Woods? 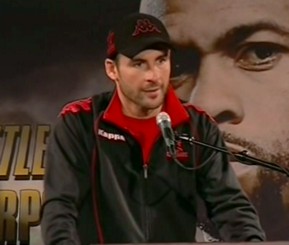 By Chris Williams: Dennis Hobson, the promoter of former IBF/WBC light heavyweight champion Clinton Woods, is interested in getting Joe Calzaghe out of retirement for a bout against the top rated Woods according to The Star. Woods recently trounced Elvir Muriqi on Saturday night in the IBF light heavyweight title eliminator match, giving Woods a future shot at the winner of Antonio Tarver and Chad Dawson fight.

However, Hobson reportedly wants bigger game than this, hoping that the chance to fight Woods might possibly lure Calzaghe out of retirement for a well-paying fight.

Hobson said to The Star, “Calzaghe is still out there; he says he’s be the best light heavy. Well let him prove it.”

Calzaghe, 36, recently retired after having beaten two of the biggest stars in boxing, Bernard Hopkins and Roy Jones Jr., in back to back fights. However, the acclaim that Calzaghe might have hoped to have grabbed with these victories somehow eluded him due to the advanced age of both of his opponents, both of whom are past or nearing 40 at the time that he fought them.

At the time of Calzaghe’s retirement, Hopkins was looking for a rematch with him to settle the controversial nature of their April 2008 fight, which ended with Calzaghe winning a contentious 12-round split decision that many boxing fans felt that Hopkins had won. However, Calzaghe, sticking to his policy of not giving any rematches, except in the case of the talented Mario Veit who Calzaghe fought twice, opted not to fight Hopkins again.

Not surprisingly, Joe decided to retire rather than face all those tough fighters who with their power, talent and youth, might have made a big dent in Calzaghe’s unbeaten record and tarnished his pristine legacy in the process. Woods, however, appears to be a step below those fighters in talent and not nearly the same kind of threat that they are.

Would the prospect of coming back to get an easy payday against Woods get Calzaghe off the sofa and into the ring? Sure, he’d take some heat for it because he would be facing arguably a lesser threat than fighters like Dawson, Froch, Kessler and Hopkins, but since when has Calzaghe been bothered by criticism?

If he can ignore it like he’s done by avoiding fights with Dawson, Kelly Pavlik and rematches with Kessler and Hopkins, then he should give Woods a fight. Given that it’s only been several months since Calzaghe last fought, I’m certain that he hasn’t lost anything yet and could take this fight without the worry of wondering what he had left in the tank. But best of all, it’s easily a winnable fight for Calzaghe without the same kind of worry that he’d be facing in dealing with dangerous fighters like Dawson, Froch, Kessler and Hopkins.