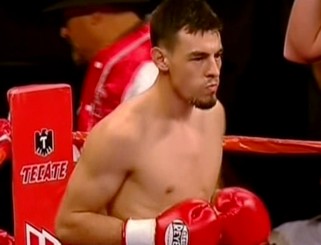 By Manuel Perez: Two-time International Boxing Federation featherweight champion Robert Guerrero (23-1-1, 16 KOs) was too much for journeyman Edel Ruiz (31-22-4, 22 KOs) on Saturday night, whom he defeated by a 1st round TKO on the undercard of the WBA welterweight championship bout between Shane Mosley and champion Antonio Margarito at the Staples Center, in Los Angeles, California.

Guerrero, 25, who vacated his IBF featherweight title to move up to the super featherweight division in June 2008, landed a left to the midsection of Ruiz in the opening seconds of the fight, sending Ruiz to the canvas in pain. He never attempted to get up and was quickly counted out by referee Jack Reiss at 0:43 of the 1st round.

Like often is the case on Golden Boy Promotion undercards, this was a huge mismatch before the first punch was thrown. Ruiz, 31, had lost seven of his last ten fights going into Saturday’s bout with the former IBF featherweight champion Guerrero and arguably didn’t belong in the same ring with a talented former champion like Guerrero.

Guerrero then landed another left to the head, and then blocked a right hand from Ruiz that was aimed at his midsection. Immediately after blocking Ruiz’s only punch attempted in the fight, Guerrero fired back a left uppercut to the bread basket of Ruiz, which sent Ruiz down on his elbows and knees on the canvas in obvious pain.

There was little question that he wouldn’t be able to make it up from the punch because he hadn’t seen the shot coming and wasn’t prepared to take a big body shot from Guerrero. The fight was then stopped by referee Jack Reiss at 0:43.

One would hope that Guerrero is matched a little tougher in his next fight because he’s advanced enough to be put in with better opposition than this. In his last fight, he easily stopped Jason Litzau in an 8th round TKO in February 2008 in Guerrero’s second defense of his IBF featherweight title.