Is De La Hoya a Quitter? 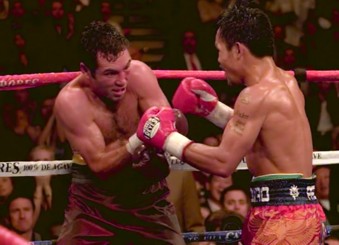 By Michael Lieberman: The sight of seeing Oscar De La Hoya quit on his stool after the 8th round was frankly sickening for me to see. A once great fighter reduced to quitting on his stool against a fighter six inches shorter than him and not nearly in his class as far as boxing skills go. If De La Hoya was a true warrior, he would have gone out on his shield, throwing punches until the end instead of just quitting like that. That probably didn’t win him many fans.

It’s his own fault he lost the fight. I mean, he wasn’t doing half bad in the bout until the 7th round when he suddenly decided to act like a sparring partner and retreat to the ropes. Once he was on the ropes, Manny Pacquiao had easy and abused him badly with a massive amount of punches.

I have no idea what De La Hoya was thinking when he made that bone-headed move, but whatever he was thinking, it sure didn’t work for. By the time the round ended, De La Hoya’s face had swelled up to grotesque proportions, with his left eye almost closed. He still had a chance to win and fought well at times in the 8th round.

The quitting part, I just don’t understand. There’s no way I would have quit on the stool if it had been me. If my trainer had said something like that to me, I would have cursed him and pushed him away and fought the remainder of the fight without and trainer.

De La Hoya should have manned up and went out for the 9th and given it his all to try and knock Pacquiao out with something big. Whether he ended up getting knocked out or not by Pacquiao, doesn’t matter. What matters is that De La Hoya fought until his breath.

After all, he was paid well enough to take a beating, so he at least should have given the fan’s their money’s worth. These people came a long way to see the fight, paid a lot of money and expected to see De La Hoya to fight as hard as he could and for as long as he could, not to see him quit when the going got tough.

When things weren’t turning out good for him, De La Hoya should have used a plan B or plan C to deal with Pacquiao’s better speed and movement. Quitting was not an option. By quitting, De La Hoya only reinforced the opinion of many boxing fans that see him as being a pampered, weak fighter who never deserved the attention that he got.

Who knows? Maybe they’re right. Sure, things weren’t going his way in the fight, he was taking a beating and looking terrible, but that’s no reason to quit on his stool. Part of being a Man is to take your beatings without complaints and without quitting.

The great fighters in the past rarely quit, and when things were tough for them, they would dig deep and fight through it. De La Hoya should have gone down swinging and been stopped on the canvas rather than on his stool. At least by doing that there would be some pride involved, knowing that he had given his best and was knocked too many times and was stopped by the referee rather than himself.

« Klitschko In Risky Fight Against Rahman