De La Hoya Loses To Pacquiao For All The Wrong Reasons 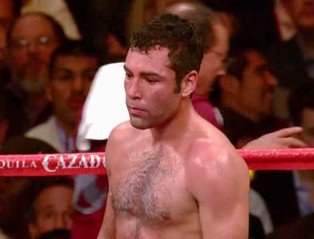 By Manuel Perez: I don’t care that Oscar De La Hoya (39-6, 30 KOs) quit on his stool after the 8th round against Manny Pacquiao (48-3-2, 36 KOs) on Saturday night at the MGM Grand, in Las Vegas, Nevada. De La Hoya has nothing to be ashamed of, because he didn’t get beat by Pacquiao on Saturday night. Instead, he screwed up and beat himself by coming into the fight so slim at 147, which as it turns out, left him weight drained, sickly looking and very weak – much too weak to fight effectively against Pacquiao.

De La Hoya, who normally walks around at 180, had to strip off a ton of weight in order to get back down to the welterweight limit, where Oscar hasn’t fought against a competitive opponent for roughly seven years.

The weight loss clearly left De La Hoya in a weakened condition against the speedy Pacquiao judging from Oscar’s lack of power, ring movement and stamina in the fight. Instead of going into the fight at around 160 and losing the last 10 to 13 pounds with temporarily draining water from his system, Oscar made the fatal mistake of melting down to 147 and fighting at that weight.

This was the complete opposite of what most fighters do, and essentially sealed De La Hoya’s fate against Pacquiao. In the process of taking off weight to get to 147, De La Hoya appeared to have lost quite a bit of muscle in the process along with fat, leaving him as weak as Roy Jones Jr. was when he fought Antonio Tarver for the second time. De La Hoya may have looked to be in shape for the fight, but he wasn’t in fighting condition.

He was more of thinned out, dieter than an actual fighter. Losing the extra muscle really hurt him, as he was only able to fight hard for one round of the fight and after that, he was weak, slow and tired looking. Those are all hallmark symptoms of a fighter that has taken off way too much weight for a fight. Believe me, no fighter loses it overnight like De La Hoya.

In his last fight against Steve Forbes in May, Oscar looked great, showing a lot power and speed and throwing beautiful combinations. That wasn’t the case against Pacquiao on Saturday night. De La Hoya looked considerably smaller, his muscles looking atrophied and melted down like a person that has been deprived of food for a considerable amount of time.

Going into a fight like that, De La Hoya would have lost to virtually anyone, not just a good fighter like Pacquiao. Forget about retirement, De La Hoya still has a lot left and can still fight well against other top fighters, but he’s got to come into the fight closer to 160 and can’t afford to starve himself down again.

I hope he doesn’t see this fight as evidence that he’s shot as a fighter, because I don’t he is. If he came into the fight at a reasonable weight, I think he would have beaten Pacquiao on Saturday night. However, he made a critical mistake of starving himself down far below what his body can take anymore.