Martinez vs. Bunema On Saturday 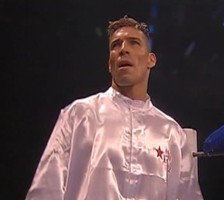 By Manuel Perez: Light middleweight contenders Sergio Martinez (43-1-1, 23 KOs) and Alex Bunema (30-5-2, 16 KOs) meet up on Saturday night in a 12-round bout for the interim WBC light middleweight title at the Pechanga Resort & Casino, in Temecula, California. This is a classic fight between a boxer -Martinez – and a pure slugger (Alex). Martinez, 33, from Argentina, is ranked number #2 in the WBC, although he’s faced very limited competition during his long 11 year professional career. Most of his fights have occurred in Argentina, where he’s defeated largely unknown fighters. Other than Antonio Margarito, who stopped Martinez in the 7th round in February 2000, he’s faced mostly fluff fighters whom he’s built up his impressive record on.

In the past year, Martinez has finally started fighting in the U.S., defeating a series of C-level fighters in Archak TerMeliksetian, Russell Jordan, Saul Roman and David Toribio. Although Martinez has defeated all of them, his absence of quality fighters on his record makes it hard for me to see him as a legitimate contender for the WBC title. He did, however, briefly look good against Margarito eight years ago in their bout, fighting well for all of four rounds. He used a lot of moment, an in an out attack and a lot of big looping hooks and uppercuts to initially give a very green Margarito some problems.

However, the fight turned around in the 5th as Margarito’s unrelenting attack began to overwhelm Martinez, who found himself unable to keep Margarito off of him despite his best efforts to back pedal away to safety. He then began clutching continuously, throwing wild shots and getting hammered by Margarito. The beating continued in rounds six and seven, with Martinez taking tremendous nonstop punishment from Margarito, who hit him with a steady flow of hooks and uppercuts until the fight was stopped in the 7th round with Martinez getting pummeled against the ropes. Once Margarito got warmed up, Martinez has no chance and was little more than a punching bag looking to survive.

As for Bunema, 33, ranked #1 in the WBA, #4 in the WBC, #5 in the IBF and #7 in the WBO, he’s faced much better competition in his career, beating Vince Phillips, Jermain Taylor, Roman Karmazin, Walter Dario Matthysse, Bronco McKart, Carlos Bojorquez and Kassim Ouma. Granted, he’s lost to Taylor, Ouma and Mckart, those losses occurred earlier in his career. He’s fought much better in the past four years, losing only once to Robert Kamya three years ago by a 12-round majority decision.

Bunema rose to fame rather recently, when he stopped former IBF light middleweight champion Karmazin in the 10th round in January to win the WBA Inter-Continental light middleweight title. Bunema was trailing in the fight in the 10th round, but surprised Karmazin with a big left hook to send him to the canvas. After he got up, Bunema finished him off with a powerful flurry. At this point of his career, Bunema will probably never be a great boxer, but with his tremendous power in his left hook and right hand, he can get away with it.

On Saturday night, I expect that Bunema’s power will probably be more than enough to take out Martinez by the 7th or 8th rounds. Martinez is a much better boxer than Bunema, to be sure, but he won’t be able to keep him off of him for the full 12-round fight. Bunema hits too hard, harder than Margarito, and once he starts connecting with his left hook, it’ll be all over for Martinez. Much of Martinez’s game is contingent on him being able to trade shots with his opponents, but against a fighter as dangerous as Bunema, that can be fatal.

Bunema will probably start out slowly like he always does, throwing moderately powered shots, but then as the fight progresses, he’ll start putting much more heat on his shots and will hurt Martinez. Once he’s hurt, Bunema is an excellent finisher and will take him out with a series of big hooks to the head.

Abraham-Marquez: Look for Raul’s Face To Be Cut to Pieces »