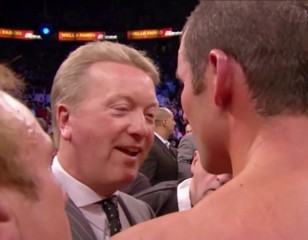 By Abbas Dadhiwala: I think the notion that to succeed in boxing in this country you need to join Frank Warren may not be all correct but it would be a great help when you have the man inducted into boxing’s hall of fame by your side. If we take it back to before Frank was a boxing promoter he started the The National Boxing Council, allowing the toughest fighters in Britain to legally go head to head. You had fighters from London meeting Irish fighters for often bloody and explosive battles. He made his cousin Lenny Mclean a known figure, not just in Britain but throughout the world. Frank Warren has guided some of Britain’s best known boxers through their careers and landed them title shots these include Prince Naseem Hamed, Joe Calzaghe, Ricky Hatton, Chris Eubank and Nigel Benn.

If you look at some of the other British promoters, you’ll notice that none of them will ever scale the heights Frank has, as most of their shows are put on in hotels or small arenas compared to Frank who has put boxing promotions at Millenium Stadium, MEN arena, O2 arena and many others. David Haye is a fine example as he had only fought in front of a small crown mainly at the York Hall until he fought Enzo Maccarinelli at the O2 arena.

Ricky Hatton, Prince Naseem, Joe Calzaghe are the main three to have left Frank in recent times and have branched out on their own. When Amir Khan turned pro they had deals from all the major promoters including Golden Boy but decided to go with Sports network as he knew only Frank can make him into a boxing World Champion. He has since renewed his contract to Frank Warren and Sports Network.

Ricky Hatton’s best performance came against Kostya Tszyu, and Joe Calzaghe’s best performance was the fight with Jeff Lacy. The best British boxing fight involving two British boxers was the Eubank-Benn fights, also promoted by Sports Network. Naseem Hamed had his best years under the tutelage of Frank Warren. Danny Williams got a shot at the former undisputed boxing world champion and the so called baddest man on the planet Iron Mike Tyson, and beat him with a stunning stoppage victory all because of Frank Warren. Audley Harrison has recently linked up with Frank Warren as his career had stalled when he decided to go his own and becoming a force in the boxing world.

Frank warren has negotiated huge television deals with Sky Sports, Itv Sport and more recently Setanta and his latest offering is a huge bill in September at the MEN arena, where Alex Arthur will be topping the bill in a World Title fight with Nicky Cook, Amir Khan is also on the bill as is Audley Harrison against the Prizefighter winner Martin Rogan. As Frank Warren aims to consolidate his position as the most powerful promoter in boxing in Britain, I for one cannot see it changing.

« Bernard Hopkins – Does Anyone Even Listen To Him?

Will Cotto Ever Be The Same Again? »