Spence vs. Crawford at 154 tarnishes it says Chris Algieri

By Dan Ambrose: Chris Algieri says the Errol Spence Jr vs. Terence Crawford will lose a lot of the luster it would have had if it took place at 154 rather than at 147 for all the belts.

Algieri believes Spence won’t return to the 147-lb division to face Crawford after he faces Keith Thurman at 154 in April in a non-title fight.

Although he likes the Spence-Thurman fight, as it allows Errol to finish off one of the remaining kings, with it happening at 154, it means we’re not going to see Spence vs. Crawford.  Algieri feels that the Spence-Crawford fight will “never” happen.

It’s unrealistic for the 32-year-old Spence (28-00, 22 KOs) to go up to 154 for the Thurman fight, then return to 147 to defend his three belts and face WBO welterweight champion Crawford for the undisputed championship.

Spence looked horrible making weight for his last fight in April against WBA welterweight champion Yordenis Ugas. He looked skeletal on the scales, and struggled during the fight, getting hurt by Ugas.

“I like the fight, and it’s not a surprise that this is the match-up,” said Chris Algieri to  Inside Boxing Live about the Errol Spence Jr vs. Keith Thurman clash in April at 154.

“It’s another good litmus test to see how good Spence is and how above and beyond the other competition there is and how much we need the Crawford fight. But the fact that it’s at 154 means that Terence Crawford and Errol Spence is never going to happen.

“It’s definitely not going to happen at 147. I can’t imagine that Errol Spence, at 32 years of age, moving up to 154, is going to fight Thurman at 154, and then move back to 147 to defend his titles and then fight Crawford. I just don’t see that realistically happening. 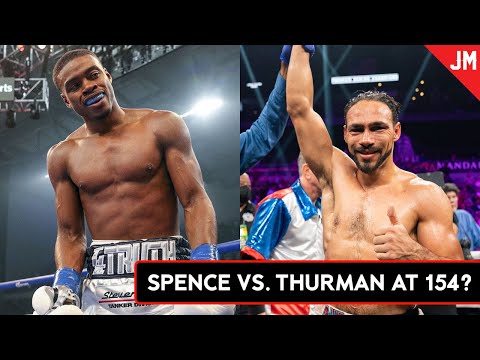 “Yes, dramatically changed the luster of the fight. We’re seeing a unification at 147,” said Algieri when asked if the Spence vs. Crawford fight loses some of the significance if it happens at 154 rather than 147 for all the belts.

“The luster of the fight is totally tarnished if they have it at 154 rather than 147.

“Yeah, I don’t think that’s going to change much as we get closer, but I do think once it’s in the rearview, it’s going to be an important match-up because that’s the last of that guard. Keith Thurman is the last of that welterweight landscape we used to see. Porter fought both guys [Spence & Crawford], lost to both, and retired. He’s no longer there.,” Algieri said about the lack of interest boxing fans have in Spence fighting Thurman because they want the Spence-Crawford fight.

“Spence came up with those guys. Danny Garcia, Shawn Porter, Errol Spence. Those guys have pretty much gone by the wayside. Thurman, whose career may have been extended because he’s not been fighting as often, is still around. It’s [Thurman] one of those four kings that needed to get his head lopped off by Spence in order to close out that era.

“Will PBC still be here in three to five years? It’s kind of the wild, wild west, and that’s always the case,” Algieri said when asked who will PBC have at welterweight after the aging 30-ish current top guys retire.

“Streaming has changed everything, and you’ve got these massive networks like DAZN coming out of nowhere and taking over. Things are changing. I’m curious to see how some of these promotional companies move with the wind, and I think some of them may be toppled,” said Algieri.


« Devin Haney vs. Vasyl Lomachenko possible for May 20th on ESPN