By Brian Webber: Gervonta Davis, Hector Luis Garcia, Jaron Ennis & Karen Chukhadzhian all successfully weighed in on Friday for their fights this Saturday night on Showtime PPV at the Capitol One Arena in Washington, D.C.

Fight fans outside the US can watch the fight card on FITETV – The main card is set to get underway at 9 p.m. ET with the main event ringwalks scheduled for 12 a.m. ET

WBA ‘regular’ 135-lb champion Davis weighed in a pound under the lightweight limit at 134 lbs, while his opponent Garcia came in at 134 lbs for their 12 round headliner bout.

In the chief support bout weights, a very thin-looking welterweight Ennis weighed in at 145.6 lbs, and his opponent Chukhadzhian scaled in at 146.2 lbs for their battle for the vacant interim IBF welterweight belt.

Ennis (29-0, 27 KOs) went overboard in making weight because he didn’t need to come in this low. It’s unknown if Ennis overdid it or if the scale he used during camp was off. Whatever the case, he didn’t need to take this much weight off.

Ellis and Boots Ennis exchanged words during Thursday’s final press conference for Saturday’s bout. Afterward, Ennis revealed that Rashidi had been offered the fight on Saturday against him, but he turned it down because the money wasn’t right.

The former two-division world champion Demetrius has been calling out Jermall Charlo all week, but he hasn’t gotten a nibble from him.

It’s almost forlorn at this point with the way Andrade keeps calling out Jermall when it’s painfully obvious that the Texas native isn’t remotely interested in fighting him.

Hopefully, someone pulls Andrade to the side and clues him in to stop embarrassing himself by asking Charlo for a fight because it’s clear to all that he’s not interested for whatever reason. 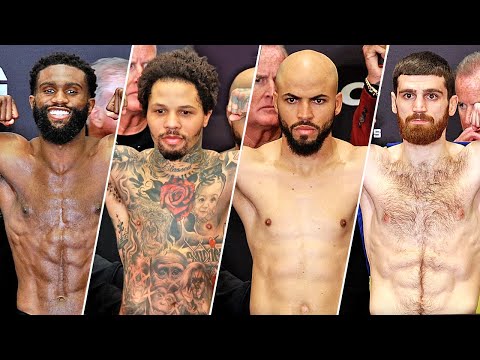