By Scott Gilfoid: Promoter Frank Warren says they’re expecting offers this week for the Tyson Fury vs. Oleksandr Usyk fight, but as of yet, they’ve still not come in.

If it’s the offer from Saudi that Team Fury is specifically waiting on, they might come up with a dry duster on that part because the fight isn’t big enough for the Middle East to stage it over there.

Despite the offers not coming in up to now, Warren remains optimistic the Fury-Usyk fight will still happen, and he’s talking about the contest potentially taking place in April.

You can argue that the Saudis may view the Fury-Usyk fight as an empty fight, lacking in excitement, particularly with Fury repeating himself all the time, using the same insults, and sounding like a broken record stuck on dumb.

Without the charismatic Anthony Joshua or Deontay Wilder, Fury is out of luck because he needs a great dance partner for his March or April fight to be attractive enough to where the Saudis will be willing to pay vast amounts of money to stage it over there.

With Fury hurting his popularity by fighting weak, low-level opponents in Derek Chisora & Dillian Whyte rather than the quality guys that the boxing world wants to see him against in Joe Joyce, Joshua, Andy Ruiz Jr, Frank Sanchez, and Bakhodir Jalolov, Fury looks like a guy that is only focused on making easy money fighting weak opposition in England.

“We’re trying to get to a point where we can announce it fairly soon, and we all think it’s going to happen,” said Frank Warren to talkSPORT Boxing about the Tyson Fury vs. Oleksandr Usyk fight.

“We’re expecting a couple of offers this week, but none of them have come through, and then Tyson has to make his decision,” Warren said. 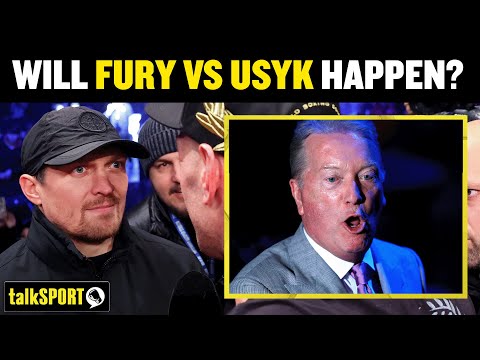 Well, it’s not sounding good, is it? It might be a good time for Usyk to bail out of this sad situation and look elsewhere because it sounds like there are no opportunities here.

“I hope it’s going to happen at the end of March, early April; that’s where we’re looking at the moment.

“So, fingers crossed we get it over the line for that date, but it will definitely, definitely happen. Tyson’s the attraction. In his last two fights, he’s had 160,000 people watching,” said Warren.