By Sean Jones: In looking back at Matchroom Boxing promoter Eddie Hearn’s best fights of 2022, you’d have to pick Dmitry Bivol’s upset of Canelo Alvarez as by far the best of the bunch.

The Canelo-Bivol fight stands out among the other great fights that Hearn scheduled in 2022 because the outcome was entirely unexpected.

Going into the contest, it was assumed that Canelo (58-2-2, 39 KOs) was going to batter the unbeaten WBA light heavyweight champion Bivol (21-0, 11 KOs) into submission just like he’d done when winning the four titles at 168 the previous year to become undisputed super middleweight champion.

Bivol upset the applecart, taking advantage of Canelo’s injured left hand and inadequate planning for the game plan needed to win against this type of opponent.

While Hearn definitely put on some great fights in 2022, most of the time, the A-side fighter won.

It was only a rare occasion you had an upset. For example, you can’t call Oleksandr Usyk’s victory over Anthony Joshua an upset in their August rematch because he’d already beaten AJ in their first fight.

“Yeah, Canelo-Bivol, when you look back now, and you start thinking, ‘Why didn’t people give more chance to Dmitry Bivol?  Why did Canelo fight Dmitry Bivol?'” said Eddie Hearn to Matchroom Boxing, reflecting on arguably the best event he promoted in 2022 between the underdog WBA light heavyweight champion Dmitry Bivol and the former four-division world champion Saul Canelo Alvarez in Las Vegas. 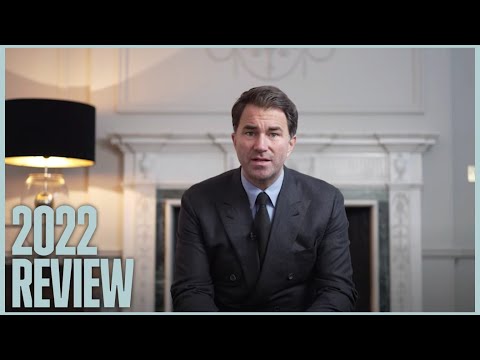 “The answer is because he wants challenges. He just become undisputed at 168 [in 2021]. He wanted to challenge himself, and he probably bit off more than he can chew,” Hearn continued about Canelo having taken a step too far.

I disagree with Hearn’s theory on why Canelo chose to fight Bivol. It’s generally believed that Canelo went up to 175 to take the heat off of him from fans who wanted him to fight David Benavidez.

Canelo’s decision to go up to light heavyweight to challenge Bivol for his WBA belt was essentially a move to swerve the dangerous fight with Benavidez, which will likely end badly for the red-haired Mexican superstar.

“Dmitry Bivol, who is long regarded as a secret, but an incredibly talented fighter that has just been crying out for that opportunity. He got it that night, and he shocked the world,” said Hearn.

“He didn’t shock everybody, but he shocked the general world by beating the pound-for-pound number one, and it was the start of the real launch of the career of Dmitry Bivol.

“I used to go to Las Vegas; one, as a kid, and two, when my dad promoted a couple of shows, and three being the B-side promoter. I always used to look at the fighter arrivals at the MGM lobby and think, ‘Wow, it’s unbelievable.

“Walking down the strip and seeing Matchroom or Canelo and Bivol on the strip. I never thought I’d get there because I never thought that this was something that UK promoters do. They don’t get TV deals in America.

“They don’t promote the pound-for-pound number one, the biggest star in America. That’s been a great relationship for us. To create those mega-nights in Las Vegas is really the crowning moment for any promoter. Canelo-Bivol will go down as one of those nights because it’s one of the perceived biggest upsets of the year,” said Hearn.

“We’ve put on the three biggest fights in America this year. Taylor-Serrano, Canelo-Bivol and Canelo-GGG. We did them all. Sometimes people want to try and downplay what we do because they’re scared. They’re scared of what we do.


« Who Made the Most Successful Titles Defenses?