Beterbiev has been dropped twice in his pro career, Smith says, and he feels that this shows that he’s not invincible. However, the guys that knocked Beterbiev down, Jeff Page Jr and Callum Johnson, could not keep him down, and he promptly got up and knocked them out.

Smith is the WBC mandatory, and he’ll be facing the winner of the Beterbiev vs. Yarde fight, so he’s got a vested interest in the fight. Whether Callum gets his shot in 2023 or he must wait until 2024, he’ll eventually get it sooner or later.

Yarde, 31, would seem deficient in experience for him to defeat Beterbiev, considering he’s still learning the ropes after eight years in the pro ranks. The progress has been slowed mainly due to the weak match-making Yarde’s management has done on his behalf.

“On paper, it’s a very big ask, but it comes from someone that wants to fight the winner and who is next to fight the winner,” said Callum Smith to Eat Sleep Boxing Repeat about Anthony Yarde having his work cut out for him against IBF, WBC & WBO light heavyweight champion Artur Beterbiev on January 28th at the AO Arena in London, England.

When Callum gets his chance to potentially fight Beterbiev, he may prove to be just as overmatched against him as Yarde. The 6’3″ stork-like Smith has arguably fought just two quality fighters in his career in John Ryder & Canelo Alvarez, and he clearly lost to both.

Smith was given a controversial 12 round decision over Ryder in 2019 in his hometown of Liverpool, but most boxing fans had him losing that fight.

“Beterbiev on paper, he’s an animal, and he’s knocked everyone out. He’s not invincible. He’s been put over twice as a professional,” Callum said about Beterbiev being dropped two times in his career. “He’s 38 now; he’s not going to go on forever. Someone will beat him at some point. It could be Yarde next weekend. Yarde has heavy hands himself. 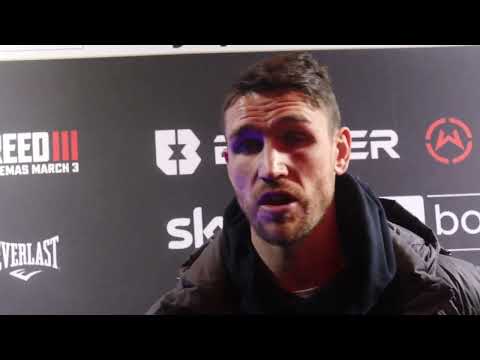 “You’ve got to give him a chance in that fight. As of until now, Beterbiev has yet to show signs of age, and he looked good last time out against Joe Smith.

“So with saying that, you’ve got to put him as the favorite, but I don’t believe it’s a foregone conclusion as some people make out. But he definitely is the favorite for me.

“No, but I’m the mandatory with the WBC,” said Callum when asked if he’s had any contact about him facing the winner. “At the WBC convention, they said the [Beterbiev vs. Yarde] winner has to fight me.

“If you want to do any sort of unification, it has to go through me first, but I think the WBC has banned Russians from fighting for belts anyways, which rules the Bivol fight out anyway. So the winner of that fight [Beterbiev-Yarde] has to fight me.

“So I’m in a good position.  I’m hoping to fight in the meantime to stay active and make sure the best version of me turns up when I fight the winner. That’s a fight that I believe I can win. I believe I can beat anyone in the world.

“I believe I’m the best fighter in the queue, and I believe the best time to do that is now,”  said Smith.


« Anthony Joshua’s April 1st opponent to be announced next week