Anthony Joshua fights Demsey McKean in April, will be trained by Derrick James

By Barry Holbrook: Anthony Joshua will be fighting Australian heavyweight Demsey McKean in April in a confidence-builder and will be trained by Derrick James as his new coach, according to Gareth A. Davies.

After losing his last two fights against Oleksandr Usyk and three out of the last five, Joshua needs a gimme-level opponent to refresh his memory about how it feels to obliterate someone like he’d been repeatedly doing up until his loss to Andy Ruiz Jr in June 2019.

Will Joshua bring Angel Fernandez with him?

Derrick James will be a good coach for Joshua, as long as he doesn’t foul things up by bringing Angel Fernandez over from the UK and making it a confusing situation about who the real trainer.

If Joshua brings Fernandez over, it will be interesting to see how well Derrik puts up with having to share coaching duties like AJ’s last trainer, Robert Garcia, did.

In hindsight, Robert should have been assertive with Joshua, letting him know that if he intended to use Fernandez as a second coach that it wouldn’t be a good situation.

It would be a good idea for Derrick to put his foot down and let Joshua know most kindly that if he intends on having Fernandez train him, he needs to move on.

“Demsey McKean, a top 15 opponent. Yeah, I do. I really do, and for me, that’s a four or five round knockout for Anthony Joshua. It gets his confidence back. No issue with that, he needs it,” said Gareth A. Davies to iFL TV when asked if Anthony Joshua will be fighting fringe contender Demsey McKean next on April 1st.

“Dillian Whyte in July and then another. Is it Fury? Is it Wilder? Is it Joe Joyce? Is it a big name? Is it a big clash in another stadium fight, probably Principality Stadium in Cardiff or the Middle East? 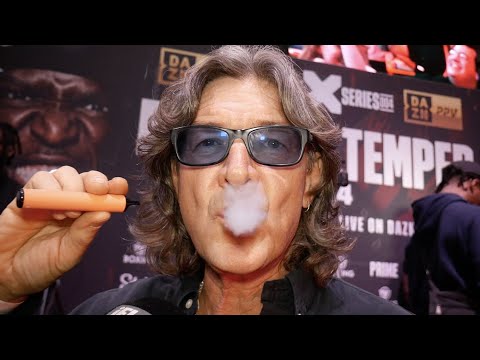 “Yeah, I think it’s good, but we haven’t seen him fight three times in a year in probably six or seven years, so it’s unlikely he’s going to fight [that many times],” Gareth said about Joshua.

“But I totally get a tune-up fight. He needs his confidence back. We saw him after his August fight against Oleksandr Usyk. He needed his confidence. He was flat, crestfallen, bedraggled even. So, yeah, I believe in the plan [of Eddie Hearn for Joshua to resurrect his career in 2023].

Joshua to be trained by Derrick James

“I think it’ll be early April [against Demsey McKean] and then July for Dillian Whyte. Obviously, he’s the guy in Dallas, Texas, that looks after Errol Spence and the Charlo twins. They’re both fantastic boxers. They show education and skills in the ring, and they’re all big punchers. They’re very dangerous punchers and fantastic boxers. It’s an old school trainer,” said Gareth about Joshua hiring Derrick James as his new trainer to take over.

“You don’t want to go through too many trainers, but Robert Garcia obviously wasn’t the right fit for him. I don’t know if he stayed with Angel Fernandez. That’ll be interesting to find out. There was some people speculating that he might go back to Robert McCracken, but its completely up to AJ what his route back is.

“Derrick James is a very respected old school trainer. So he’ll learn old school tricks. Is he too much of an old dog now to learn new tricks? We don’t know, but we want AJ back in the fire and the destroyer that he’s capable of being. That’s what we really need,” said Gareth.


« Naoya Inoue has vacated his 118-lb titles, moving to 122 to become undisputed