By Chris Williams: Errol Spence Jr’s trainer Derrick James says Terence Crawford’s low pay-per-view numbers for his fight with David Avanesyan now define him, limiting his ability to get the deal he wants for a fight between them.

Derrick states that while Crawford (39-0,  30 KOs) might view himself as being in a particular place, he’s referenced by his pay-per-view numbers for his fight with Avanesyan, and he’s not going to be able to get what he wants because his value, such as it is, is now known.

James feels that given Crawford’s PPV numbers for his fight with Avanesyan, he doesn’t see it as possible for a match between him and Spence to be made now. Crawford will want a deal with Spence that he doesn’t rate, and nothing can change all that.

In hindsight, Crawford should have stuck it out with the negotiations for a Spence fight instead of walking away to fight Avanesyan.

Crawford should have known that a match against Avanesyan would bring in terrible PPV numbers, which would in turn hinder his ability to negotiate a fight with Spence.

If Crawford was going to walk away from the negotiations with Spence, he should have fought someone popular like Keith Thurman, Jaron ‘Boots’ Ennis, or Jermell Charlo. At least if Crawford had fought one of them, it would have likely brought in many PPV buys and subsequently helped him in his negotiations with Spence once they were revived. Choosing Avanesyan was a blunder on Crawford’s part.

“It was very upsetting, but at the same time, you’ve got to brush it off and keep moving. Something you hoped for and wanted, but it’s okay,”  said Derrick James on Last Stand podcast about his thoughts on the Errol Spence Jr vs. Terence Crawford fight not happening this year. 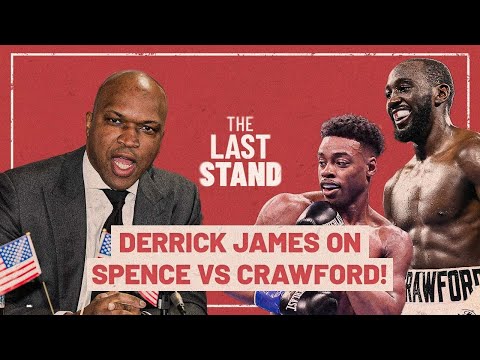 “To build a fight is what makes a fight,” James continued. “So what happens is that when you see him [Crawford] take this other fight [David Avanesyan] and not build a fight. He gets what he wants, but the promoter as a whole don’t get what they want.

“If you were to go into negotiations now with those numbers, you have no leg to stand on. In fact, yesterday’s price is not today’s price. Yesterday was an assumption, but today is a fact,” said James.

It’s true what James says about Crawford now being in a greatly weakened position in the negotiations with Spence. Indeed, whatever deal was offered to Crawford before likely will be off the table, and a reduced offer made that reflects his PPV numbers for his fight with Avanesyan.

“You can’t come up in my face with this & that if that’s what you’re doing [in terms of pay-per-view numbers or lack thereof],” said James. “It was something unnecessary for him to find out.

“That’s what you are now,” said James about Crawford’s rumored low PPV numbers for the Avanesyan fight, which defines/limits him when it comes to his eventual negotiations with Spence.

“I’m going to reference who you are. You can’t hide behind the machine at ESPN and Bob Arum. Now, he’s [Crawford] by himself. It may not happen [Spence vs. Crawford] because his perspective of who he is is something totally different from what those [low PPV] numbers say, and those things aren’t going to add up.

Tank Davis still in jail, accused of hitting woman on top of head »