Fury will be arrested if he slaps Usyk says David Haye

By Jim Calfa: David Haye says Tyson Fury will get arrested if he goes ahead with his threat to slap Oleksandr Usyk in the face if he sees him ringside this Saturday night for his fight against Derek Chisora at the Tottenham Hotspurs Stadium in London. Fury slapping Usyk in an unprovoked manner would be seen as a physical assault.

Hopefully, Fury will control himself and not take that step because it could end badly for him.

Usyk plans to enter the ring after his fight with Chisora to promote their undisputed clash in March.

“I doubt that. He’ll get arrested,” said David Haye to iFL TV when told that Tyson Fury says he’s going to slap Oleksandr Usyk in the face if he sees him at ringside on Saturday night in London.

It could be a humiliating experience for Fury if he attempts to carry out his threat to slap Usyk because he’s slower than him, and he could get easily countered by the Ukrainian. Given that Usyk won’t be wearing gloves, he could do some damage with his bare fists.

Fury says he didn’t like the unified heavyweight champion Usyk (20-0, 13 KOs) mocking him in interviews on social media, calling him a drunkard.

“He doesn’t need to. It’s the #1 slapping the #2 in the face,” said Haye about Fury. “Why not greet him? Let’s look forward to giving the fans [a good fight]. Don’t slap him outside. Slap him inside the ring.”

The comment from Usyk seems to have hit a nerve with Fury because he says he will slap him in the mouth. 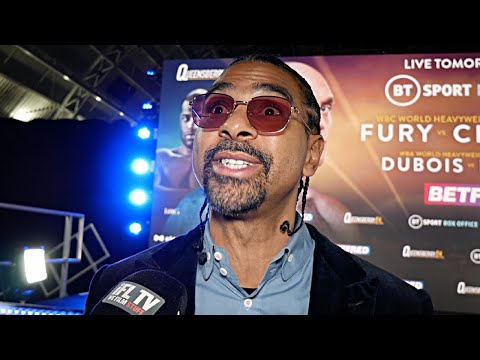 “It sounds simple to make. I can’t see any complications with it,” said Haye about the Fury vs. Usyk undisputed clash. “Nine times out of ten, dollars make sense. This fight is nearly as big as the Anthony Joshua fight. Let’s find out who’s #1 first, and then we can start doing those mega-mega fights.

“It’s a unification. After the unification fight, if he wants a big-money fight, then why not Anthony Joshua?

“His last fight against Pulev was very action-packed, very entertaining, threw punches from the first round to the last round,” Haye said about Chisora in his last bout against 41-year-old Kubrat Pulev last July.

“He wasn’t looking to take a break in any of those rounds. His cardio is good, and if Tyson Fury fulfills on his promise. He shook hands to go toe-to-toe in the middle of the ring from the first round. If he fulfills on that, we’ve got ourselves a great fight.

“Derek Chisora isn’t a great long-range boxer. He’s never claimed to be. He never wanted to be. He wants to go to war and go to battle.

“If Tyson Fury obliges him and goes to the center of the ring and uses his size and his power, and they both start trading, we’ve got fireworks,” said Haye.