Unfortunately, the chances of Joyce getting a fight against any of those four heavyweights are virtually zero. Even the journeyman Chisora will likely decline a fight with Joyce if offered.

Joyce (15-0, 14 KOs) is coming off an eleventh round knockout victory over former WBO champion Joseph Parker in Manchester. After that impressive victory by Joyce, none of the guys that Fury mentioned will want to tangle with him.

Chisora is 38 years old and just got a big payday against Fury. If Chisora continues on, he’ll almost surely face weaker opponents to build himself up in hopes of getting another big payday fight handed to him in a year or two.

“I want to give Joe Joyce his credit,” said Tyson Fury to talkSPORT Boxing. “Joe Joyce deserves an opportunity at a world title. Let him have one.

“Dillian Whyte is a good one, Derek Chisora, Daniel Dubois rematch, and AJ. 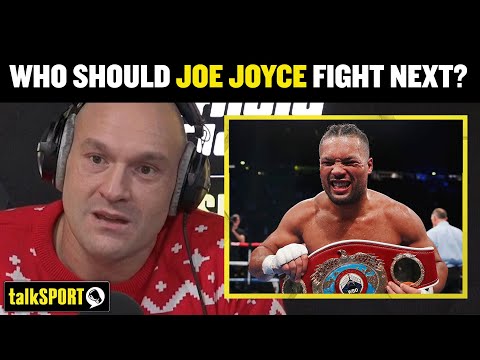 In chronological age, Joyce is old at 37, but physically, he appears a lot younger, closer to 27 or 28 years old. Joyce looks much younger than the 34-year-old Fury, even though he’s three years older.

When the two fighters stood next to each other last Saturday night inside the ring at Tottenham Hotspurs Stadium in London, Fury appeared at least ten years older than Joyce in this writer’s view.

Fury had the appearance of a 40-year-old man standing next to a 28-year-old. With how Fury is aging, it would be a good idea for him to fight Joyce as soon as possible because if he waits a year, he won’t have any chance of winning.

Whyte (28-3, 19 KOs) is expected to be matched up against Anthony Joshua in 2023, so he’s not going to put that big payday at risk by fighting Joe Joyce and getting chewed up by him.

Whyte looked awful in his last fight, winning a questionable 12 majority decision over American Jermaine Franklin on November 26th. Dillian looked shot in that fight, as he was dominated in the first nine rounds before rallying in the championship rounds.

This writer had Franklin winning handily by 9-3, and it wasn’t close if you go by rounds won. Whyte obviously will never agree to fight Joyce because he’ll get torn apart and lose his big-money fight against Joshua.

Fury wants the 6’6″ Joyce (15-0, 14 KOs) in 2023 after he first faces IBF, WBA & WBO champion Oleksandr Usyk for the undisputed championship. Ultimately, whether the Fury-Joyce fight happens will depend on the outcome of Fury’s fight with the unbeaten Usyk (20-0, 13 KOs).

It’s doubtful that even Fury will take the fight with Joyce next year. Although Fury says he wants to give Joyce the opportunity, he’ll likely maneuver around him next year.

Fury will have the perfect excuse for not fighting Joyce due to his body breaking down on him with nagging injuries or if he loses to Oleksandr Usyk in the first half of 2023.