By Adam Baskin: David Morrell says he views the Caleb ‘Sweethands’ Plant vs. David Benavidez match as a “50-50” affair, with both guys possessing the speed & power to win.

Morrell (8-0, 7 KOs) holds the WBA ‘regular’ super middleweight title, and he wants to face the winner of the Plant – Benavidez fight.

Those two are still negotiating for a WBC 168-lb title eliminator in the first quarter of 2023.

That fight changed the minds of a lot of people, perhaps including Morrell as well. When asked by Fighthype who wins the Plant vs. Benavidez fight, Morrell said, “It’s 50-50.”

Plant likely wouldn’t be taking this fight with Benavidez if not for the need to get a significant win under his belt to try and entice Canelo Alvarez to give him a well-paying rematch.

Canelo knocked out Plant in the eleventh round last year in November, and there’s no reason for him to give ‘Sweethands’ a rematch unless he beats someone well-respected like Benavidez. 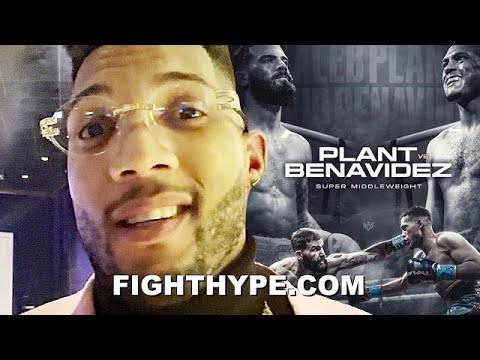 Plant would arguably be doing Canelo a massive favor if he were to defeat Benavidez because he would be getting him off his back. Benavidez has been pushing Canelo for a fight for ages but with no luck.

At this stage in Canelo’s career, the pressure isn’t just coming from Benavidez. The fans are now pressing Canelo to fight Benavidez, which could be why the Mexican star went up to 175 to face WBA champion Dmitry Bivol last May.

If Plant defeats Benavidez, Canelo can permanently ignore him, and there would no longer be any need for him to go up to 175 to justify dodging the fight.

The Cuban Morrell would like to face undisputed 168-lb champion Canelo Alvarez, but that’s probably an unrealistic option for him.

Canelo won’t fight Morrell because the risk-reward isn’t there for him to be willing to face him. Even if the World Boxing Association were to order the 32-year-old Canelo (58-2-2, 39 KOs) to fight Morrell, he’d likely drop telt.

The WBA is supposed to be reducing the number of champions in each weight class, but for some reason, they’ve not ordered Canelo to fight the ‘regular’ 168 champion Morrell.

It’s not only the WBA dragging its feet at ordering Canelo to fight their other champions. The WBC hasn’t ordered Canelo to defend against interim champion Benavidez. They did order Benavidez and Plant to fight in a title eliminator, but it remains to be seen whether the winner will get a shot at Canelo.

The World Boxing Council has got to know that if they order Canelo to face the Plant-Benavidez winner,  there’s an excellent chance that the Mexican star will vacate the belt if he’s not feeling like taking the fight.

This is what happens when you get a fighter that amasses a considerable amount of popularity. They can pick & choose who they’ll fight, and the fans suffer.

Morrell, 24, is coming off a twelfth round knockout win over Aidos Yerbossynuly on November 5th at the Armory, Minneapolis. The fight ended tragically, with Yerbossynuly suffering a subdural hematoma.