By Jack Tiernan: WBA ‘regular’ heavyweight champion Daniel Dubois (19-1, 18 KOs) had a close call tonight, needing to get up off the canvas on three separate occasions before getting his act together to TKO South African Kevin Lerena (28-2 114 KOs) in the third round on Saturday night at the Tottenham Hotspur Stadium in London.

The southpaw Lerena knocked the much bigger 6’5″ Dubois down three times with left hands in the first round. 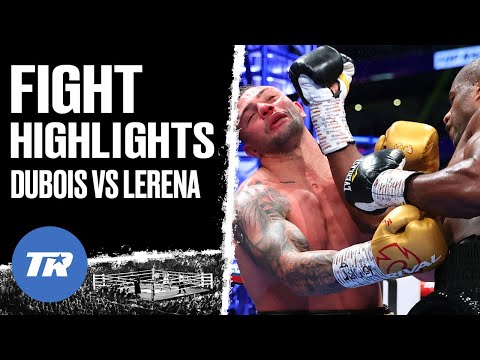 In the third round, Dubois dropped Lerena with a massive right hand to the head. Shortly after that, Dubois landed several big uppercuts to put Lerena on the canvas as the bell rang. The referee Howard Foster stopped the fight anyway.

Lerena had a chance to win if he’d gone for the finish in round two, as Dubois was still hurt as he came out. Instead of going for the KO, Lerena took his time, choosing to follow slowly and not unload with his left hand.

The negative that you have to take from this performance from Dubois is how shaky his chin looked and how unconfident that he appeared against a fighter that isn’t a huge puncher. Moreover, Lerena is nowhere near as good as some of the other contenders in the division.

For Dubois to be going life & death with this level of opposition suggests that he’s not improved since his stoppage loss to Joe Joyce. In that case, Dubois’ promoters are going to need to keep him at the level he’s at now, fighting the no-names like Lerena, Bogdan Dinu, Joe Cusumano, and Trevor Bryan.

If they put Dubois in with a good heavyweight, he will surely lose, and his career will go belly up.

Tonight’s shaky performance from Dubois wasn’t just a case of him getting taken by surprise by Lerena. He looked robotic and slow throughout the fight and would have been knocked out in the second round if Lerena had the presence of mind to go for the finish at the start of the round.