Some would feel that the 6’6″ Joyce (15-0, 14 KOs) will make for a more entertaining fight for the boxing public than the southpaw Usyk, who is more of a pure boxer and lacks the size & power to stay in the pocket against the 6’9″ Fury.

Joyce would be a tough opponent for Fury because he’s an excellent jab, great engine, an iron chin, and the size to negate the leaning & mauling that Tyson has come to rely on to win fights in the last three years.

“I’m giving my old mate Derek Chisora a crack at the whip for the third time, but this time for the heavyweight championship of the world. I’m repaying the favor,” said Tyson Fury to Frank Warren’s Queensbury.

“I want a minimum of three fights next year. Get this man out of the way first,” said Fury about his fight against the 38-year-old Chisora, who has lost three out of his last four fights.

“Chisora beat Usyk. I think he could have nicked him by a round or at least a draw. I don’t think that I know it,” said Fury when asked if Chisora gave Usyk a better fight than Anthony Joshua did.

“None of the people in history could have ever competed with ‘The Gypsy King.’

“The first time we fought [in 2011], he was the British and Commonwealth champion, and I took them from him. Then he was the British and European champion in 2014, and it was the final eliminator for the world title. I always promised Derek Chisora that I would fight him for the third time, and I would give him that opportunity, and here we are again.

“That’s all Deontay needs. An incredible athlete, fair play,” said Fury about Deontay Wilder’s first round knockout win over Robert Helenius. “He’ll have to come to Wembley in April,” Fury said about a fourth fight with Wilder. 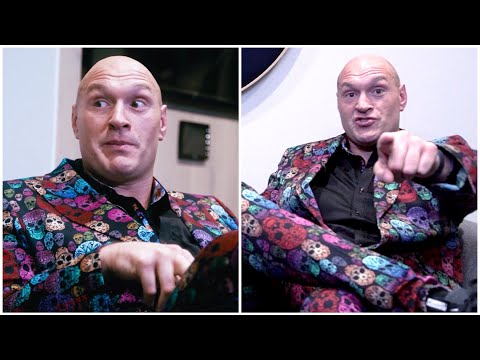 Fury on Anthony Joshua fight: “There’s no glamour in fighting a coward” »