Tank Davis vs. Ryan Garcia still have hurdles to overcome

By Sam Volz: Gervonta ‘Tank’ Davis vs. Ryan Garcia fight still has numerous hurdles to overcome before it is a reality for April 15th on Showtime PPV in Las Vegas.

Both fighters must get through their interim contests without losing or suffering injuries. Tank (27-0, 25 KOs) has chosen to take a risky tune-up against WBA super featherweight champion Hector Luis Garcia (16-0, 10 KOs) on January 7th in Washington, D.C.

That’s a fight that could prove plenty tough for Tank, and even if he wins, there’s the possibility that he could suffer a cut.

For his part, Ryan (23-0, 19 KOs) hasn’t revealed who his opponent will be for his tune-up, but he’s probably going to take a quality guy, too, because he’s not going to want to look bad in comparison to Tank.

As Dan Rafael points out, Tank Davis has a court date for his alleged hit & run. There’s a chance that he could get some jail time out of this. If that happens, his fight with Ryan will need to get pushed back.

Ryan and Tank probably should have waited before making their announcement because there are too many unknowns right now for their fight to be a sure thing.

“Gervonta Davis and Ryan Garcia both eagerly pushed for this fight. It wouldn’t have gotten to the point where there was at least an agreement without the really strong pressure from the athletes,” said Dan Rafael to Boxing Social.

“It may not be for a world title, but does anybody really care? They’re doing the fight at a 136-pound catchweight. That means Gervonta’s second-tier WBA title won’t be at stake, but that doesn’t matter. Most fans are interested in the fight title or no title. In the last few years, it’s the biggest non-title fight in boxing.

“Both fighters put on their social media. Ryan put out a press release. the people at Showtime acknowledged that the fight is agreed to. They sent out a couple of comments from their boss Stephen Espinoza.

“Everybody involved is agreement that there is an agreement, but as you know, in boxing, the devils are in the details. At least for now, Tank Davis is going to take an interim fight. He’s supposed to fight on January 7th in Washington, D.C.

“He has to win that fight [against Hector Luis Garcia]. He has to come out of that fight uninjured, and there’s a strong possibility that Ryan Garcia will take an interim fight.

“The same rules apply. He would have to win and make sure he comes out uninjured. I know interim fights are dangerous because weird stuff can happen. Certainly, a loss, maybe an injury, maybe a cut that would prevent the fight from happening as scheduled. You would hope that doesn’t happen.

“You also have the issue that Gervonta Davis is facing criminal charges in a court in Baltimore in an incident that allegedly occurred in November 2020. The trial date is set in mid-February.

“He faces 14 charges on hit & run accident. Obviously, if he’s found guilty in the trial, he could wind up in prison. He faces a maximum of 50 months in prison, and there’s a lot of things that could happen.

DAZN was pushing hard for their involvement. Showtime, which works with Davis, said, ‘Absolutely not. We’re not interested in working together.’ In the end, they came to an agreement that in fact it’ll be DAZN that will sit this one out. It’ll be Showtime that produce and distribute.

“The fight is a long ways away. There’s not even contracts signed. I’m pretty sure when it comes to pass if it comes to pass the people in your neck of the woods are going to be able to watch this great fight.

“They’re both in the primes, and they’re putting that zero up at risk, not even for a title. For better or for worst, Gervonta Davis and Ryan Garcia have been able to do so.

“There’s members of their teams that are not happy about this deal. Golden Boy Promotions, if you talk to them privately, they’re happy to give their guy the opportunity, but they’re taking it up the rear in this fight.

“Based on what I know, it’s not really a great deal for them, but that’s how much Ryan Garcia wants this fight, and he should be applauded. People have mocked him, made fun of him, and ridiculed him for a lot of different reasons and because he’s got a ton of Instagram followers.

“I don’t think it really matters,” said Rafael about the Davis vs. Garcia fight not having a title on the line. “It just means his secondary title isn’t available, which isn’t really considered a world title anyway.

“I don’t think that’s a big factor. I don’t think it’s Davis saying, ‘If I lose at 136, I can still have my belt.’ I think Ryan was really comfortable in his last two fights that he took in 2022, where he fought close to the 140-lb limit.

“Tank Davis fought at 140 when he knocked out Barrios and he won the secondary belt in that weight class also. I don’t think that’s any great advantage [136] or detriment for either fighter.

“You had to get Golden Boy and [Ryan] Garcia on the same page. You had Garcia putting extreme pressure on them [Golden Boy and DAZN], saying, ‘I don’t care what it takes. You better make this fight.’

“I think they realized, ‘That we either bend to what he wants and he’ll stay with us, or if we play hardball and we don’t let him have the fight, then he’s not going to fight, and he’s going to leave us, and there’s going to be a lawsuit, and it’s going to be like what happened with Canelo.’

“So it’s sort of like, pick your poison. They’re going to put their money on the middle of the table and hope their guy wins the fight. Then he would hopefully come back to DAZN after that as a much bigger name if he beats Tank Davis.

“It makes sense that Tank would be a slight favorite. With diehard boxing fans, he has a better resume, and people know him more. Davis has a few more names on his record, even if they’re guys that aren’t at their best weight and a little past their prime.

“Ryan Garcia has fought some good opponents, but he doesn’t have a name like Leo Santa Cruz or even a Gamboa. They’re guys that Tank beat pretty handily by a knockout, but they were past their best days, but they didn’t have their fame level.

“I think Tank is looked at as having better one-punch power. Listen, it’s a competitive fight. I just can’t wait for this fight. How can it be anything other than entertaining? They’re going to talk a lot of s**t going into this fight.

“I hope all the things that need to take place will happen. I’m not going to get super pumped up until I know there are signatures on paper, that they’ve won interim fights without injuries, that Gervonta’s legal situation is handled, and they have a venue, and the tickets are on sale, and there’s a press conference and a press release.

“When it’s done, it’s done. Right now, it’s just the promise that it’s going to get done. Pardon me, but I’m not big on promises in boxing. I’m big in actions in boxing.

“I’m not falling for the nonsense until it’s done. I feel the guy that willed this fight to be and was not going to take no for an answer was Ryan Garcia. He told his people and his lawyers, ‘Get this fight done, and don’t talk to me about some other fight.’

“They’ll talk about an interim fight now that this agreement is done. Ryan Garcia’s willingness not to take no for an answer and bringing Davis along with him, who also wants a big fight.

“He’s fought a lot of decent names, but he’s never had a fight of this magnitude. This is a real big deal for these young guys,” said Rafael. 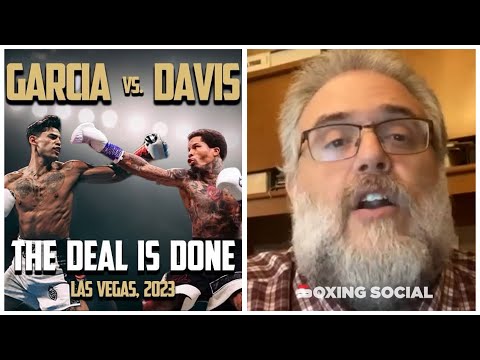 Will Munguia agree to face Zhanibek for WBO 160-lb title? »