By Vince Dwriter: Ryan “KingRy” Garcia (23-0, 19 KOs) used his post-fight interviews to make call-outs, utilized his social media platforms to trash-talk, endured a complicated negotiation process, and now he’s finally got what he wanted, because April 2023, in Las Vegas, he’s scheduled to step in the ring to face his arch-rival Gervonta “Tank” Davis (27-0, 25 KOs), at a catch-weight of 136-pounds.

After signing with Golden Boy Promotions back in 2016, Ryan Garcia started his boxing journey, and he experienced success early and often. While Garcia was establishing his boxing resume, Devin Haney, Teofimo Lopez, and Gervonta Davis were also winning and creating impressive profiles.

Due to the fact that the quartet of young undefeated boxers all flourished around the same time, their names became linked together. ESPN branded Garcia, Haney, Lopez, and Davis in Jan. 2021 when they gave them the moniker of the new “Four Kings.”

All four members of the group at some point, and at times traded verbal shots with each other, but for some reason, the verbal sparring between Garcia and Davis lasted for an extended period of time. When Ryan Garcia initially attempted to call out Tank Davis in 2018, Davis responded by calling Garcia a kid, and he offered him a position as his sparring partner.

Garcia did a lot of talking outside of the ring, but he knew in order to book a match with Gervonta Davis, he had to make a statement inside the squared circle. He showed his heart in January 2021 when Luke Campbell connected with an overhand left that sent him down to the canvas. Kingry was able to bounce back, and he score a 7th round knockout victory.

A year later, Ryan Garcia had his signature moment inside the ring when he faced former WBA featherweight champion Javier Fortuna. Garcia connected with a body shot to knock Fortuna down in the 4th; he used a left hook to put him down; in the 5th, finished Javier Fortuna off in the 6th round, and then he proceeded to once again call Tank Davis out during his post-fight interview.

Four months later, Ryan Garcia finally received the green light to face his longtime rival Gervonta Davis, and a day after the big announcement, Kingry is already hitting the media circuit. One of his first stops was joining Stephen A. Smith on the ESPN morning show “First Take.”

During the segment, Ryan Garcia spoke about how he had to chase Gervonta Davis down because Davis was running from him. Now that the two undefeated boxing stars are set to face each other, Garcia feels as though the stars are aligned perfectly for him to show that he’s the best fighter in the world.

Ryan Garcia is feeling confident in regard to defeating Gervonta Davis, and he displayed it by closing out his interview with a bold prediction.

“I’m predicting a KO. That’s what I would say, a KO. I will knock out Gervonta Davis.” 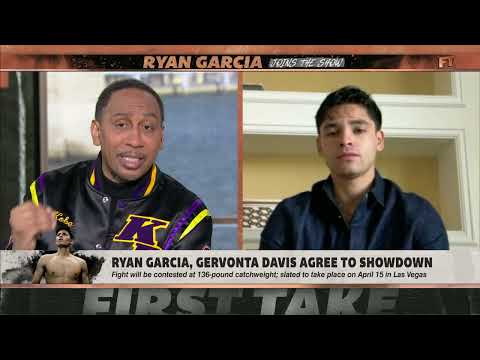