By Barry Holbrook: John Ryder weighed 167 pounds, while Zach Parker came in at 167.3 lbs for their fight for the vacant interim WBO super middleweight title this Saturday night at the O2 Arena in London (live on ESPN / BT Sport). 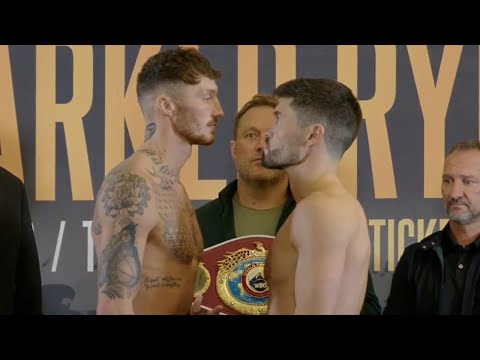 Although it hasn’t been confirmed yet, there’s a strong possibility that the winner of the Ryder-Parker fight will face undisputed super middleweight champion Canelo Alvarez next May in the U.S.

“We’re going to do the job on Saturday night. It doesn’t matter with the trash-talking,” said John Ryder to iD Boxing. “It’s the best at the moment,” Ryder said about his fight with Parker.

“I give him [Parker] full credit. He’s  22-0, and he hasn’t put a foot wrong yet. Listen, he hasn’t mixed it at the level that I have. I’ve been in with champions and former champions, and future champions.

“He says I’m small for a super middleweight. We’ll see on Saturday night. I rate the opportunity of going against bigger opponents. Listen, he’s not the biggest I’ve fought, so I’m not worried,” said Ryder about Parker.

“Obviously, the David Benavidez vs. Caleb Plant fight is going ahead. I think for myself moving ahead, this was the best opportunity. There were talks of the Munguia fight, but the prospects of the WBO interim title really trumps that.

“It’s a good opportunity. Go and get the win on Saturday night. There are still other big fights to make for this title. Everything is tied up at the moment, but in time, it can change. In the meantime, you can still make some defenses with the [WBO] interim title,” said Ryder.

“I think I’m quite good, and I’m underrated. I’ve got a lot to achieve in this sport. Watch this space come Saturday night,” said John Ryder to Behind The Gloves about his fight with Zach Parker for the interim WBO super middleweight title this Saturday.