Fury (32-0-1, 23 KOs) and Usyk are heading towards a showdown next year, and it’s possible that the winner of the match will start vacating belts almost immediately to swerve fighters like Joyce (15-0, 14 KOs).

With Fury, he’s shown no issues about vacating belts in the past, and he’ll likely do the same to swerve the big 6’6″ Joyce to save himself from getting worn down and stopped.

Now that Fury is no longer able to move around the ring as he used to in the prime of his career, he would be forced to trade shots at close range against the Foreman-esque Joyce.

A close combat war with Joyce would end badly for Fury because all the mauling tactics he utilized to defeat Deontay Wilder twice wouldn’t be nearly as effective against the 260+ lb ‘Juggernaut.’ Joyce is stronger than Fury, who is still flabby despite weight loss and carrying far less muscle.

“I know it would be a mega-fight in the UK, I know that s**t for sure,” said Rolando ‘Rolly’ Romero when asked what happens in a fight between Joyce and Tyson Fury. “He’s an Olympic gold medalist. Like I said, him and Fury, that would be a big, big fight. Two big motherf***ers fighting.

“That would be nothing but bombs right there,” said Rolly about Joyce vs. Deontay Wilder. “Two punchers. I heard that he [Joyce] knocked out a certain former world champion [Anthony Joshua]. I heard he knocked him out cold before.

“I’m not going to say who. A former champion. Out of all the heavyweights, there’s Wilder, Fury, there’s Usyk, and the other one [Joshua], Andy Ruiz, and Frank Sanchez too. I’m talking about the top, top, top earners in that division. Maybe, yeah,” said Rolly when asked if it was Joshua that Joyce knocked cold.

“Swerve, swerve, swerve, slip, slip, but sooner or later, you’re going to get hit by ‘The Juggernaut,'” said Joyce when told that Fury and Oleksandr Usyk downplay the possibility of fighting him when it’s brought up. 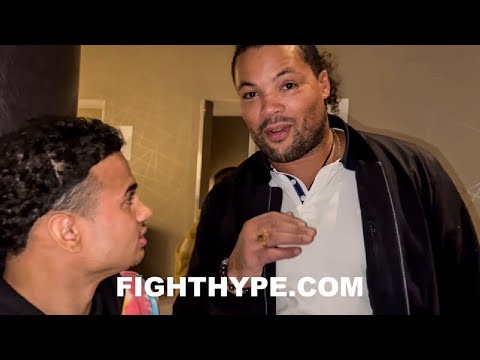