Davies was the dominant force throughout the fight, pitching his tactics to perfection and frustrating the wayward Baluta, who simply couldn’t effectively get himself into range. 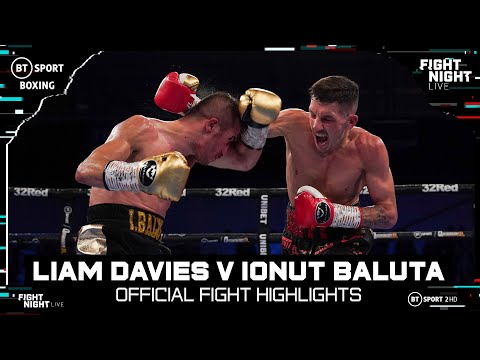 The long jab of Davies worked overtime and he measured his distance to keep the Romanian out of range.. The Telford favourite was tidy and well drilled, while Baluta resorted to wild swings that rarely came close to the target.

“It is amazing and another step up in my career,” said the new double champion. “I am 13 fights in and I’ve won the English, the WBC, British and European titles. I’ve got to give myself credit, but I will be back in the gym soon and I’ve conquered Britain, I’ve conquered Europe and now let’s go for the world with BT behind me. Why not?

“I felt comfortable all the way. I hurt my hands on his head, he’s got a very hard head and I had a blister that bloody hurt moving about. But look, I got the job done, I done it in my home town as main event and I’ve got Frank Warren and all the team getting behind me.

“Look at all the people supporting me. Money can’t buy that, memories for life.

“I was too comfortable at times and I cruised through the fight again. I don’t think I’ve really been tested yet and I am ready for another step-up. I am ready to go up and up and up.

The OVO Arena, Wembley, will stage Yarde’s night of destiny, but he had to find a way past a tough customer in Koykov, who didn’t hide and came to trade. Yarde, however, became more fluent and accurate with each passing minute and a big right uppercut in the third resulted in it being down and out for the German.

The timing of Yarde’s 22nd victory via KO was 2.31 and now a big Wembley night on BT Sport awaits.

Eithan James successfully moved to 10-0 after a barnstorming encounter with Keinen Wainwright.

‘Jammy’ had to call on all of his heart and courage after he was knocked down in the first round by the Sheffield man and was subsequently hampered by two bad cuts caused by head clashes.

The 22-year-old effectively regrouped in the fifth round and likely took the remaining rounds as referee Kevin Parker scored a gripping fight 96-94 in his favour.

Confident light heavyweight Ezra Taylor – now 4-0 – was untroubled by late opponent Mohamed Cherif Benchadi, with the Frenchman put down twice and on the second occasion referee Chris Dean had seen enough and waved the fight off after 1.53 of round two.

Dubliner Willo Hayden eased to victory over six rounds against Marian Marius Istrate, adopting a patient approach to overcome the Romanian by a margin of 60-54, adjudged by referee Chris Dean. Hayden moves to 5-0 in the pro ranks.

Owen Cooper became Midlands Area welterweight champion by virtue of an outstanding performance that completely overwhelmed the champion Jamie Stewart. The 22-year-old had his man down in round five after landing a straight left and referee Kevin Parker scored the fight as a total shutout at 100-89 in favour of the now 7-0 Cooper, who really looks like he is one to watch.

Liverpool super bantamweight Brad Strand put Darwin Martinez to the canvas on his way to a 59-54 victory that takes him to 9-0 and on the cusp of title contention.

York super welterweight prospect George Davey took his record to 6-0-1 with a career-first stoppage of Paul Cummings in the fourth round. Local lightweight Macaulay Owen also grounded his opponent Eduardo Valverde but was forced to go the six-round distance to move to 5-0.