What time is Ramirez vs Bivol tonight?

Bivol vs Zurdo Ramirez: The main card is set to get underway at 1:30 p.m. ET / 5:30 p.m. GMT with the main event ringwalks scheduled for 5 p.m. ET and 9 p.m. GMT. The card will stream live on DAZN in multiple countries across the globe (except Russia, South Korea and MENA regions). Bivol vs Ramirez takes place at the Etihad Arena in Abu Dhabi. 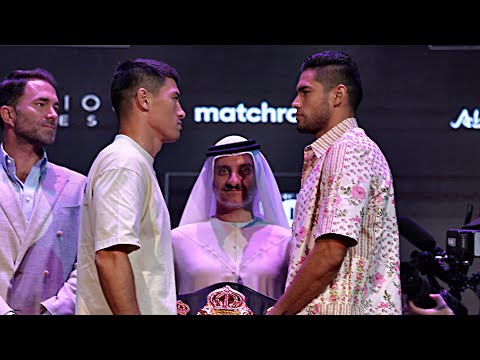 “A historic moment for Abu Dhabi, the DCT and for Matchroom Boxing as well as we build a long-term partnership here of global high-profile World Championship fights. November 5 is the start of such an exciting future in what has become a global sports hub here in Abu Dhabi.

“This is an iconic moment and we want to thank so many different people – the DCT, we want to thank Eleven as well, Frank Smith who’s done such a great job. There has been a lot of hard work that has gone into this process. We are about building long-term partnerships with outstanding partners, and great people to work with.

“You’ve seen across the NBA, you’ve seen across the UFC, Dana White and the team couldn’t speak more highly of everyone involved in their relationship with Abu Dhabi. For us as a business, this is just the start of a new world of boxing here in the Middle East and in Abu Dhabi. Earlier on today we announced that Joe Cordina will defend his IBF Super-Featherweight World Championship against the Mandatory Challenger Rakhimov and the undisputed women’s Light-Welterweight World Championship – Chantelle Cameron McCaskill. They’re the first three fights announced for November 5 in the stunning Etihad Arena.”

“First of all, hello everyone and thank you for coming. Yes, maybe it’s one of the toughest fights in my career. I’m thinking like that every time before my fights. I want to say thank you to you Eddie and Matchroom, and everyone in Abu Dhabi. Everyone who wanted to make this fight.

“I’m glad to defend my title in Abu Dhabi. I heard this is the first time that someone has defended a World Title in Abu Dhabi. It’s great to be the first. I hope it’s not the last time in Abu Dhabi. Thank you to Ramirez for this fight. I know he wanted this fight a long time. Me too. Now it will happen. He is a good fighter and I like challenges. I like to fight against the guy who has won 44 fights and who is bigger than me and taller than me. This is a big challenge for me. I hope it will be a great fight on November 5.

“Thank you, Eddie. You’re definitely back on the team of course. You were never off the team because I think you believed in Dmirty the whole way from the beginning – just like the rest of us. It’s very exciting.

“After the Canelo fight obviously it’s a second level of motivation they have to find. Any fighter that goes to that level, they have to motivate themselves to go on. Having to fight a guy like Ramirez who is very well respected, who has never lost and who has fought some of the top-level guys, it’s something that you have to overcome and it’s something that we have to do.

“You have to find something inside you to get that victory again. I believe that Dmirty has that mentality and he is always very tough and confident. I think he will be able to do it and go on to get the other belts after this. That’s something that we look forward to as well.”

“Thank you. Thank you everyone. Thank you for having us and for the hospitality. I’m glad to be here in Abu Dhabi. It’s my first time here and I feel like I’m at home because it’s the same weather as back home – hot and humid. It’s perfect for me.

“Thank you Matchroom and thank you to Golden Boy for making this possible. I’m looking forward to getting that title on November 5 to become a two-time World Champion. I think it will be a great night, an exciting fight for everyone. Even for me, I can’t wait for this fight. I’ve been waiting so long for this moment and I just want to say thank you to Dmitry Bivol for taking this fight.

“I think we’re going to put on a great show for all of the fans and for Abu Dhabi. It will be a great night. He is one of the greatest 175 pounders’ and he beat one of the greatest fighters in boxing too. Congratulations to him. I knew he would be a tough fight for Canelo. It was a great night for Bivol because he beat him by unanimous decision. It was great. What can I tell you? I’m 44 fights and 44 wins.”

“I just want to thank everybody for being here. The hospitality has been incredible. It’s an incredible city, a beautiful city – it’s my first time here. I want to thank DAZN and Joe Markowski – thank you for all you do. Eddie, you and your team, Frank Smith. It’s always a pleasure working with you guys. I want to thank the champion Dmity Bivol, his manager Vadim. This is a great fight. This is going to be an incredible fight. Both fighters are undefeated and it’s going to be a very exciting fight. I don’t normally like to give predictions, but I’m compelled to give a prediction for this fight. I feel strongly that the winner is going to be Abu Dhabi. Abu Dhabi and also the world of boxing. It’s rare that we put these fights together, it’s a special event, so thank you guys very much for having us and we look forward to November 5.”

“Thank you, Eddie, and thank you to everyone up on the top table here today. It’ great to be here with old friends and new. Thank you to our hosts here in Abu Dhabi and to the DCT. Dmitry, it wasn’t too long ago that we were toasting your success in Las Vegas, late at night in your hotel room after your last win. It’s great to be back working with you.

“It’s a fantastic schedule we’re building on DAZN as we head into Autumn. In a couple of weeks’ time we have Canelo and GGG in a fantastic trilogy fight. More to come from our X Series – a new venture with KSI in the world of crossover boxing. This fight in early November as well as Eubank-Benn – a fantastic PPV event in the UK.

“This event is representative of exactly what we’re trying to do – a global schedule with fantastic fights, matchups happening when they should happen and delivered with fantastic partners of which there are many sat on this table. We’re very excited, we’re looking forward to it and it’s great to be in business with Abu Dhabi.”

“Thank you very much Eddie. I can’t express how happy we are for all of you to be here. This happiness is on a personal note because we’ve made new friends of Abu Dhabi, but also on a professional level where our partnership today and the announcement we’re doing today is a milestone for Abu Dhabi within what we are planning for the rest of the future.

“Normally whenever you start a certain vertical you want to start with a big bang, and I think the fight that has just been announced is a fight that everyone has been waiting for. I think it’s one of the first times that combined you have over 60 fights to zero. How could we have started with anything better than this? Thank you very much for putting this together.” 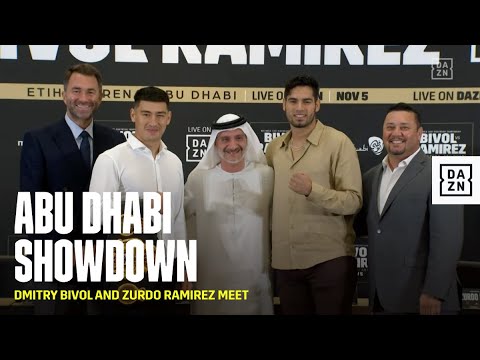 
« David Morrell predicting 8th round knockout of Yerbossynuly on Showtime