Gervonta Davis vs. Ryan Garcia: Will the fight happen?

By Craig Daly: Paulie Malignaggi questions why the management & networks chose to announce their 136-lb catchweight fight between Gervonta ‘Tank’ Davis and Ryan Garcia right now when there are STILL five months to go before they’re scheduled for their April 15th clash & the fact that both will be taking interim matches in between.

Malignaggi thinks the promoters chose to announce the Tank vs. Ryan right now because there’s a “lull” in boxing, so they chose to put it out there to get people talking.

Additionally, by announcing the fight, they can get fans amped up for their interim fights against opposition that people might not have gotten excited about.

On Friday, Showtime announced that Tank Davis will defend his WBA ‘regular’ lightweight title against Hector Luis Garcia on January 7th on PPV at the Capitol One Arena in Washington, D.C.

While that is a great fight if you’re a hardcore boxing fan familiar with Hector Garcia, many casuals have never heard of him.

As such, because of the early announcement of the Tank vs. Ryan fight in April, fans are more likely to be interested in seeing Tank-Hector clash on January 7th then they normally would.

Ryan (23-0, 19 KOs) hasn’t announced who he’ll be fighting for his interim fight, but it’s not expected to be a risky opponent or anyone near the level of Tank’s tune-up fight against Hector Garcia.

A guy like that would likely be the heavy favorite against Ryan if it were to go down because he’s a lot more experience and technically sound.

What we’re probably going to see from Ryan is another older fighter with no power brought in to make him look good to get casual boxing fans energized to see him face Tank.

“It feels like a big tease. Why to announce it right now if both guys have to fight a fight in between first?” said Paulie Malignaggi to Paulie TV about the Gervonta ‘Tank’ Davis vs. Ryan Garcia fight on April 15th.

“Why can’t you announce it when both guys get these next fights out of the way?”

It’s obvious that the announcement of the Tank vs. Ryan Garcia fight was made to get people talking about it early and particularly to make it easier for them to sell interim/tune-up fights for both guys.

As I said, fans wouldn’t get excited about seeing Gervonta fight Hector Luis Garcia if that were the only match they had to look forward to. But with fans seeing the Tank-Hector fight as a tune-up before the Tank-Ryan match-up in April, they’re going to be more willing to open their pocketbooks and pay the $70+ to order the warm-up fight on January 7th on SHOWTIME PPV.

“In a boxing landscape like today, where nothing is guaranteed anymore, it’s so much harder to make these fights done, and it’s really annoying. Why to make this announcement if it’s not their next fight?” said Malignaggi.

“So much can happen. I just feel like boxing has a little bit of a lull right now, and they figure, ‘Let’s just say this. Let’s just announce it.’

“They may have agreed to a lot of the terms, if not all, but so much could come in the way between now and then, especially with both guys fighting in between. There may be another big offer that comes their way.

“Maybe someone can’t make weight by the time it happens in mid-next year. There are so many things that can get in the way. Why announce it now? Like I said, I just feel that there’s a little bit of lull in this moment, so they figured, ‘Let’s just take advantage and get people excited and get people talking right now.’

“It’s way too far in advance. It’s so far in advance that I’m still not too sure what to believe. If the fight does happen when it gets closer, probably when both guys win their next fights.

“I’m assuming Ryan is also going to have a fight in between if Tank is going to do that. Ryan is not going to want to be inactive until the spring. At this point, why do you need tune-ups for?  These guys are at a high enough level where they should go into a fight with one another.

“To be honest, a lot of the fights that they’ve both been having have been tune-ups. I don’t see the need or the point of saying, ‘Let’s have a fight in between first.’ It’s just another way to steal people’s money in the meantime.

“I hope the fight does happen. It’ll be great. I probably favor Tank in the fight, but honestly, I do think Ryan has the combination of things that could give Tank trouble if he was willing to be in a dog fight because I think it’s going to take a dog fight in order to beat Tank.

“I question whether Ryan wants to be in that kind of a fight. I think Ryan has the power to hurt Tank. I think he has the range to put Tank into some problems trying to get on the inside.

“He’s got fat feet, and he has different weapons that he knows how to use in order to be deceptive on his way in where he can then hurt you. If I analyze it too much, I do get excited about the fight, but I don’t want to be a tease. 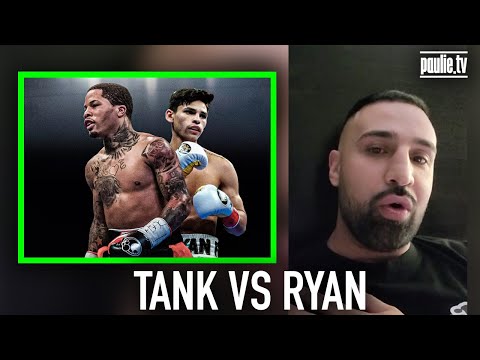