By Charles Brun: Eddie Hearn was pleased with Dillian Whyte’s 12-round majority decision victory over Jermaine Franklin (21-1, 14 KOs) on Saturday night, and he says Anthony Joshua will be next for ‘The Body Snatcher’ in the first half of next year.

As far as Hearn is concerned, it was a clear victory for Whyte (29-3, 19 KOs) over Franklin at the OVO Arena in London.

Hearn says that Whyte would have knocked out the 29-year-old Franklin if there were more time in the 12th round. It didn’t look that way to his writer.

It appeared that Whyte had shot his load after knocking Franklin into the ropes in the 12th, as he was the one that was reeling as the fight ended, not the other way around.

Whyte’s poor stamina plagued him the entire fight, not just the 12th round. He looked like an old man who no longer had the stamina needed to compete at a high enough level to knock out a foe that he was supposed to stop.

Whyte wasn’t facing one of the elite heavyweights tonight. He was fighting an unknown guy with fast hands but not much in the way of power.

If it had been Joe Joyce, Deontay Wilder, Filip Hrgovic, or Daniel Dubois in there tonight, there would have been no chance for Whyte to be saved by a questionable decision because those guys would have taken the old relic out.

Whyte looked like an old car with way too many miles on it, and he was getting taken advantage of by a younger heavyweight. Although only five years separated the 34-year-old Whyte from the 29-year-old Franklin, it might as well have been 20 because Dillian looked like a fossil from the Mesozoic era.

The years haven’t been kind to Whyte, as he’s not the guy that beat Joseph Parker by a controversial decision or did the same to journeyman Derek Chisora in their first fight. Whyte looked glacially slow tonight, getting beaten to the punch all night by Franklin, and needing to be saved, thanks to the bizarre scoring by the three judges.

Of course, with Hearn wanting to make a Matchroom in-house fight between Whyte and Anthony Joshua next, none of those talented heavyweights were brought in for Dillian to fight.

Instead, the unknown Franklin was found, and he surprised many people by getting the better of Whyte and losing a controversial decision.

“Jermaine Franklin was outstanding, and I think it was a very,  very close fight,” said Eddie Hearn to Matchroom Boxing following Dillian Whyte’s questionable 12 round majority decision over Jermaine Franklin on Saturday night in London, England. 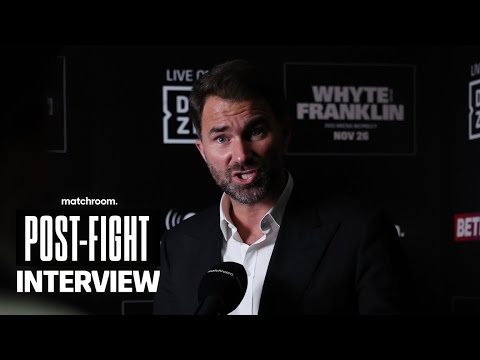 “When I got in the ring after, I said to Dillian, ‘It’s close.’ ‘No, it’s not.’ ‘I think it is. I think you needed all those rounds to win the fight, and I had you winning the fight.’

“A very good performance from Jermaine Franklin, as we knew. A quality heavyweight and a tough night for Dillian Whyte. Overlooked by people that maybe hadn’t heard of him, but we knew.

“Speaking to everybody and Dmitry Salita and people back in Michigan, this kid [Franklin] can really fight. He’s been over sparring with Tyson Fury and had some rounds with Daniel Dubois. He’s a very good heavyweight. He showed that tonight.

“Dillian Whyte, with a new trainer [Buddy McGirt], tried different stuff but was actually reverting to type at the end that got him out of jail in the fight, quite frankly. To me, when you’re hitting the body for seven or eight rounds, you have to switch it up to the head.

“It was when he did that he started having some success. He hurt him badly in the tenth, he hurt him really badly in the twelfth, and one more round or one more minute, and the fight was over.

“Franklin boxed really well. He’s very smart with a great boxing IQ, and he’ll come again. It was a great performance. He wanted to watch Wardley-Gorman, and he, of course, wanted to watch Whyte against Franklin,” said Hearn about Anthony Joshua being in the audience.

“His next date is fast approaching, and he’s looking at those guys throughout the whole fight, thinking, ‘Whoever gets this, I want the winner.’

“Dillian Whyte got the winner. Whether that’s in March or whether that’s in June or July, I feel pretty confident that fight will take place. He’s ready to go. He’s [Joshua] licking his lip,” said Hearn.

If Joshua knew what was good for him, he won’t have anything to do with Whyte because the backlash will be tremendous if he picks him.

The only way Joshua gets any credit for his next fight is if he chooses someone that isn’t coming into the fight under a dark cloud of controversy like Whyte. Moreover, Joshua can’t fight someone that is totally shot like Whyte because he’ll get laughed at and seen as a cherry-picker.

The only way Joshua doesn’t get royally dumped on by the boxing world is if he chooses one of these heavyweights for his next fight:

Whyte is fighting at the level of Derek Chisora at this stage in his career, which makes sense because that was his level even during the prime of his career.

Dillian was never a good heavyweight, to begin with, and his best career wins were situations where he was given questionable decisions in fights that he appeared to lose, like tonight, for example.

“He’s ready to get back into camp, and he’s ready to return. For sure, every AJ fight is a stadium fight, particularly against Dillian Whyte,” said Hearn. “He’s looking for a big year, three fights, and that’ll be a great all-British blockbuster.

“Like I said, Jermaine Franklin will be involved in big heavyweight fights. It was a good performance, but Dillian Whyte is looking at AJ; he’s looking at Deontay Wilder. He’s looking at all those big names,” said Hearn.