By Sam Volz: Eddie Hearn insists that the rematch between Anthony Joshua & Dillian Whyte is the third biggest fight for AJ in the division.

Hearn says the only two fights that are biggest for Joshua than a Whyte rematch are AJ vs. Tyson Fury and AJ-Deontay Wilder.

Joshua-Whyte would be big in the UK, but it’s still a poor fight along the lines of Fury vs. Derek Chisora.

Another problem with Joshua (24-3, 22 KOs) fighting Whyte (29-3, 19 KOs) next is that it would only be big in the UK because U.S. boxing fans view Dillian as a shot heavyweight. They’re not going to eagerly purchase the fight on PPV the way the British fans would.

A potential problem with Hearn making the Joshua vs. Whyte 2 rematch is that AJ might want to fight someone else in a tune-up in February or March before facing Dillian in the summer.

Hearn says that if Joshua takes a warm-up fight, he will look to match Whyte against one of these fighters to keep him busy:

With the way Whyte struggled against Jermaine Franklin last Saturday night, he could lose to all three of those fighters. Indeed, Whyte probably isn’t capable of fighting any of those three.

It’s fair to say that Hearn would have to dip down below the top 15 to find a heavyweight that Whyte could beat conclusively without controversy like we saw last weekend with his victory over Franklin.

It would look bad if Whyte fights someone and is given another controversial decision in the UK.

“Why I want to make that fight is because it’s massive,” said Eddie Hearn to iD Boxing about his desire to make the rematch between Anthony Joshua and Dillian Whyte. “Two blokes from London that are 1-1. They don’t particularly like each other.

“So when you look at potential opponents for Anthony Joshua, there are only two fights in boxing that are bigger than AJ against Dillian Whyte, and that’s AJ against Tyson Fury and AJ against Deontay Wilder. 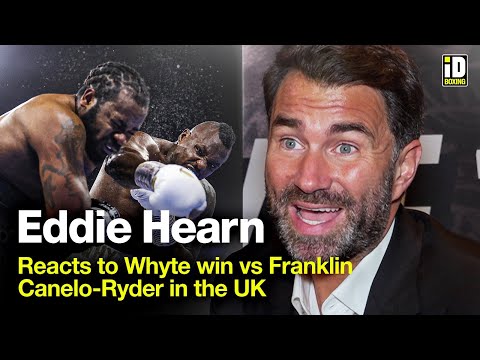 “It depends on if he wants to do that in a stadium. We don’t want to do that when it’s freezing cold, like next week. We could still do that next.

“I knew he was a good fighter, but what surprised me was his toughness,” said Hearn about Jermaine Franklin. “He took a lot of hammers to the body. He took quite a lot of shots, and I think he’s an outstanding fighter,” said Hearn.