Dmitry Bivol needs opponent for next fight in 2023

By Craig Page: Dmitry Bivol needs an opponent for his next fight in early 2023 after Canelo Alvarez chose to take a tune-up fight in May of taking the rematch.

Bivol’s promoter Eddie Hearn likely has some good choices for him to go overseas to England if he’s unable to set up a match-up against Artur Beterbiev.

With Canelo saying he wants a tune-up, Bivol isn’t saying who he plans on fighting next.

If Bivol were willing to move down to 168 for his next fight in 2023, he might be able to get fights against David Benavidez or David Morrell. Those two would be very interesting options.

The undefeated WBA ‘regular’ 168-lb champion Morrell (8-0, 7 KOs) has a belt Bivol could fight for. However, Morrell fights on Showtime, and that might make it tricky for Matchroom to set up a fight between him and Bivol, as he fights on DAZN.

We know that he would like to face IBF, WBC & WBO light heavyweight champion Artur Beterbiev for the undisputed championship next, but that’s not going to be possible because he’s defending against Anthony Yarde in early 2023.

Options for Bivol’s next fight:

“I expect the fight like it went. Ramirez, he did everything that he could. He threw a lot of body punches and tried to catch me on the body. It wasn’t easy for me,” said Dmitry Bivol to the DAZN Boxing Show when asked if his victory over Gilberto ‘Zurdo’ Ramirez was an easy one.

“It looks easy. The whole fight, I was focused and tried to push him the whole time. I took a little bit of pause in round eight.

“It was two different fights,” said Bivol when asked who hits harder between Ramirez and Canelo Alvarez. “I spent a lot more energy and focus in my fight against Canelo because I felt I had to win every round, and I tried to do it.”

Bivol’s promoter Eddie Hearn might look to schedule him against one of the British fighters, perhaps Joshua Buatsi or Callum Smith, and have him fight in England. Those would be easy matches to schedule.

Unfortunately for Bivol, the light heavyweight division is barren of big names. Once you get past Beterbiev, there’s not much for Bivol to fight. Buatsi and Callum aren’t well known in the U.S, and neither of them are stars in the UK.

Bivol says he’d like to do something different by fighting Canelo for his undisputed 168-lb championship when the two meet in September 2023.

Canelo wants to put off the rematch with Bivol (21-0, 11 KOs) until the second half of next year because he wants to test out his surgically repaired left hand in a tune-up fight in May.

Knowing Canelo, his tune-up will be one of the super middleweights in the division and not an easy touch. Hopefully, Canelo (58-2-2, 39 KOs) wins his warm-up fight because if he loses, that might create another delay for his rematch with WBA light heavyweight champion Bivol.

“With Ramirez, a couple of times, I thought, I could make a pause and do it again,” said Bivol. “Against Canelo, all fight, I wasn’t about power; of course, Canelo was a more powerful fighter. Canelo, his punch more harder than Ramirez, but Ramirez used more combinations. He threw three punches and Canelo one or two, and Canelo faster.

“A little bit, we changed the sparring partners,” said Bivol when asked if he changes things during camps for different fighters. “For a fighter like Beterbiev, you have to be focused every single second of the fight.

“Of course, it depends on the promoters,” said Bivol when asked who determines who he fights next. “I can just say that I want to fight this guy, and they listen to me and think about business and make something.

“Of course, for my legacy, it’s better to fight for another belt. I made 10 defenses. Of course, I want more. I want to feel like I fight for something else, not just to defend my title.

“Maybe, I will drink and forget about,” said Bivol when asked what he’ll do after beating Beterbiev. “I think I will be fat too. I love eating.

“‘Okay, I need to fight, I will fight,’ and I got used to situations like this. I can say to my promoter, ‘You can make me every fight which is the biggest you can see. Beterbiev, I’m ready. Canelo, I’m ready, but I prefer.

“I hope they will save me a big money fight with another boxer, not another [Youtuber],” said Bivol when asked if he’d be interested in fighting Jake Paul. “I respect him. He’s big; he’s strong. Hey, I’m scared.

“I respect him. He became a boxer and won some fights. It’s good. He earned money and made a shot, but it’s not 100% sport. It’s 50-50. It’s part show. I want to be famous in the sport. I don’t want to be famous because I talk dirty stuff about someone.

“One of the hardest punchers was Jean Pascal. He’s not a hard punch. Canelo, when he beat, it’s like a heavy punch. But Pascal, it’s heavy and sharp.

“Of course, move to super middleweight,” said Bivol when asked if he’d move up to cruiserweight or 168 if he were to defeat Artur Beterbeiv to become the undisputed champion at 175.

“It’s a good idea too [to fight Canelo for his undisputed super middleweight championship], but for cruiserweight, I’m not that big. I had breakfast before weighing in,” said Bivol. 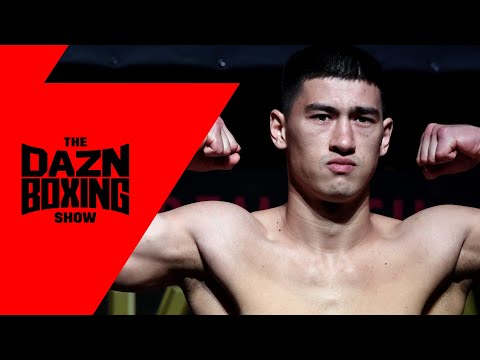