By Jim Calfa: Roy Jones Jr. believes that Devin Haney vs. Vasyl Lomachenko is a “50-50” fight despite the huge size & youth advantage of the undefeated, undisputed lightweight champion.

Jones feels that Haney’s size advantage will be balanced out by Lomachenko’s technical ability, and he doesn’t view it as a situation where Loma will be too small like many fans do.

Until Lomachenko’s recent close call against his former sparring partner Jamaine Ortiz on October 29th, many boxing fans felt that he was too experienced & technically talented for the one-dimensional Haney (29-0, 15 KOs).

The 34-year-old Lomachenko (17-2, 11 KOs) looked old, slow, and small in his narrow win over Ortiz and lucky that his foe gassed out in the later rounds.

After the fight, Lomachenko looked tiny next to Haney when the two were interviewed by ESPN inside the ring.

If Lomachenko is unable to get on the inside on Haney, he’s going to get picked apart from the outside. In Loma’s fight against Jamaine Ortiz, he let him tie him up on the inside all night without fighting out of the clinch.

If Lomachenko allows Haney to clinch nonstop, as he did in his two wins over George Kambosos, he’ll have no chance of winning. Haney does a lot of holding to keep his smaller opponents from getting their shots off when they get in punching range.

Despite Haney’s huge size in comparison to his opposition, he can’t punch and has power at the level of a featherweight. But with Haney’s jab & grab technique and massive size for the 135-lb division, he’s been able to get over and find success.

“We know that the Loma blueprint has been the bigger guy. Haney is definitely the bigger guy who can also box. Can Loma go out and take all the boxing skills away from him? We don’t know. But for them to say, ‘He don’t have a chance,’ that’s bull crap. That’s a 50-50 fight,” Jones Jr said about Haney vs. Lomachenko. 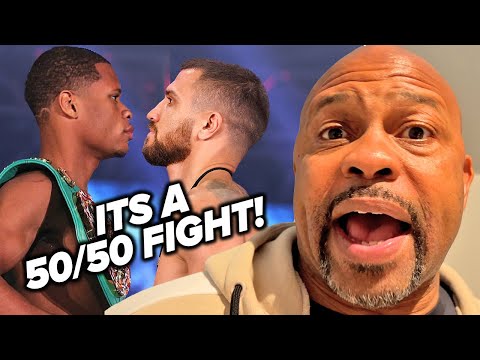 
« Haney vs. Lomachenko: Is Devin too big for Loma?