By Dan Ambrose: David Avanesyan says Terence ‘Bud’ Crawford isn’t in for an easy fight when he defends his WBO welterweight title against him on BLK Prime pay-per-view on December 10th at the CHI Health Center in Omaha, Nebraska.

Other fans wonder why the 34-year-old Avanesyan was selected in the first place as the opponent for Crawford to fight on BLK Prime PPV because the fight has little chance of bringing in many buys.

Crawford isn’t a PPV fighter, and with the eight-figure purse [$10 million+] that he’s getting for this fight, a more popular fighter was needed.

Crawford and Avanesyan share a common opponent in Egidijus Kavaliauskas. Avanesyan was stopped in six rounds by Kavaliauskas in 2016, whereas Terence knocked him out in nine rounds in 2019.

“This is a big opportunity for me, a big chance. I deserve this fight,” said David Avanesyan to Fight Hub TV about his title shot against WBO welterweight champion Terence ‘Bud’ Crawford on December 10.

“My manager called me and said, ‘Crawford’ and I said, ‘Yeah.’ I no think. I said, ‘Yeah, I want this fight.’ This is a good fight. This is not an easy fight for Terence for fans that understand boxing. 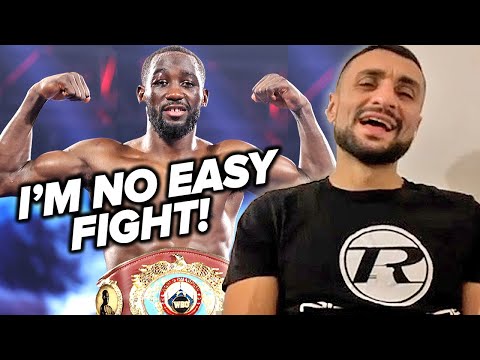 “American fans see that I lost to Egidijus Kavaliauskas and that he lost to Crawford. I’m a quality fighter. I’m 34 years old. I’m focused on this fight.

“I need to win this fight. There’s a good chance. I am happy. I show before six times.

“Kavaliauskas after he fought me, he [fought to a] draw [against Ray Robinson. This guy, Josh Kelly fought.  If you ask me, Kelly won that fight. I stopped Kelly in the sixth round. I showed people I’m a different fighter.

“This is a good chance for David Avanesyan. On December 10th. I need to give everything and take everything. After Crawford, I want to see David and Spence fight.

“They [BLK Prime] called me and asked if I want to fight Crawford. This fight was ready to go in two days. Why do you think Spence-Crawford didn’t fight? Because of money.

“I’m in good condition. I need big fight. I’m 34-years, and I have 33 fights. This is good time. David’s hand is good punch. Don’t forget. Yeah, Crawford has been down before.

“I want to fight a good fighter. I deserve this fight. This is a big fight. Kavaliauskas is a power guy. He can punch, and he knocked Crawford down. Kavaliauskas waited too long.

“If he gets ten million, good job. Why not? Boxing is a hard sport.I’m not going to tell now what I give big surprise. I do my best to go in the ring and give my best in this fight.

“I’m not thinking about a KO. When you only think about the knockout, it’s not possible. It’s possible; I take my time,” said Avanesyan.