Chris Eubank Jr vs. Liam Smith agreed, to be announced next week for early 2023

If everything goes right, Shalom says the Eubank Jr. vs. Smith fight should be ready to be announced by next week.

Unfortunately, this isn’t the match-up that boxing fans were hoping to see, as the Eubank Jr. vs. Conor Benn bout went up in smoke after Conor’s two positive tests for the banned substance clomifene.

That would have been a decent little scrap, but only because Eubank Jr would have been severely drained due to the double whammy of a 157-lb catchweight combined with a rehydration clause, which some boxing fans believe was a mere three pounds. What in the world was Eubank Jr thinking in signing for that fight?

“It’s just about the date now. I speak to Kalle [Sauerland] regularly Everything is agreed,” said Ben Shalom to iD Boxing about the Chris Eubank Jr vs. Liam Smith fight. “Hopefully, we’ll announce it next week.

“I’m looking forward to it. It’s a fight I’ve wanted to see for a long time. I was hoping to get it in this year, but we’re looking at five weeks, six weeks from December 17th.

“It’s probably going to be slightly later, but the fight is going to happen, and it’s one the fans can look forward to,” said Shalom.

I think I speak for a lot of boxing fans when I say that Eubank Jr. vs. Beefy Smith isn’t one that a lot of fans are looking forward to.

A MUCH better fight for Eubank Jr would be against some of these killers rather than the fading 154-pounder Smith:

Eubank Jr is getting up there in age at 33, and he hasn’t fought a decent opponent since he was schooled by George Groves in 2018. After that fight, Eubank Jr arguably backed off from fighting world-class opposition and has been seemingly content in going the domestic route.

Rather than going for the best, Eubank Jr has been content to stay with the domestic crowd, taking easy paydays against opposition that is no threat to beating him. 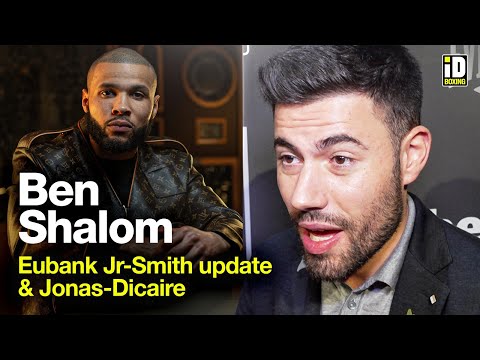 
« David Benavidez: “I don’t consider Caleb [Plant] as one of the best”

Josh Taylor vs. Jack Catterall II on Sky PPV, to be announced next week or two »