By Brian Webber: IBF/WBA/WBC welterweight champion Errol Spence Jr has been ordered to defend against his WBC mandatory Keith ‘One Time’ Thurman for his next fight.

We don’t know if Spence will honor the World Boxing Council’s order for the Thurman fight. However, given how deathly quiet Spence has been since yesterday’s WBC ruling, you suspect he’s thinking about getting rid of his WBC 147-lb title to avoid the bout.

If Spence vacates his WBC strap, Thurman will face #2 Vergil Ortiz Jr (19-0, 19 KOs) for the belt, and that’ll be an interesting one to watch.

Thurman could prove to be the kryptonite for the unified 147-lb champion Spence, ending his reign as a world champion before the sharks, Jaron ‘Boots’ Ennis, Vergil Ortiz Jr, and Terence ‘Bud’ Crawford could get to him.

Former WBA/WBC 147lb champion Thurman (30-1, 22 KOs) has been the equivalent of the third rail that Spence (28-0, 22 KOs) has seemingly been afraid to touch for the last five years.

Now Errol is being forced into the fight due to the World Boxing Council ordering it on Wednesday during their convention. The only way out for Spence is to quietly vacate his WBC title to swerve Thurman and come up with a good excuse to tell the media when he’s asked about it.

Thurman has been targeting Spence for years, calling him out 24/7, pushing for the fight with no luck, but he’s got ‘The Truth’ cornered, thanks to the WBC ordering the fight.

Not surprisingly, Spence has been eerily quiet since yesterday, perhaps in shock after hearing about the WBC ordering the Thurman fight. Spence is likely thinking, ‘Is it worth it for me to take this risky fight against Thurman? Maybe I should vacate the WBC belt and hightail it to safer, less shark-infested waters at 154?‘

If Spence moves up to junior middleweight, he can avoid ‘The Big Four’ at welterweight:

Those are the dangerous sharks circling Spence’s leaking craft, looking to tear him apart once his ship goes down to the murky depths.

“You took that WBC that I vacated. That’s the truth. Stop playing. Be the man to defeat the undefeated,” said Keith Thurman to the Last Stand podcast. “We respect you; we admire all that you’ve done, Errol. We watched you compete for the USA at the Olympic games.

“I’ve been beaten one time. Who is going to beat me two times?” 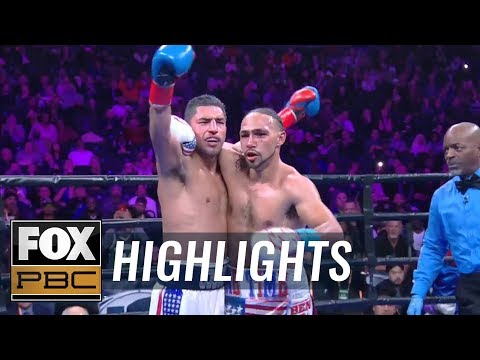 David Benavidez: “I don’t consider Caleb [Plant] as one of the best” »